Diamond Dash is as simple as it gets when it comes to puzzle experiences with gameplay revolving around players clicking on groups of similar coloured blocks. With 60 second rounds Diamond Dash is a good option for short play sessions or competing against friends. 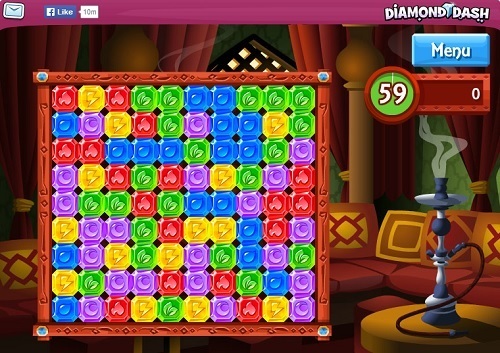 The game was developed by wooga and can be played either through Facebook or on your iOS/Android device. Diamond Dash thrives on Facebook connectivity as it doesn’t offer much without the leaderboard system and sense of competition that it invokes. So be prepared to play on Facebook or link up Facebook on your handheld device for the full experience.

Gameplay in Diamond Dash involves clearing as many gems from the screen as fast as you can in order to generate points. Players need only click (or press) on a group of gems which has three or more of the same colour. They are then instantly cleared and replaced with new gems from the top of the screen.

Games in Diamond Dash are split into 60 second bite sized pieces with players attempting to get the highest score possible in that time. Every time you play a game in Diamond Dash you’ll use up one of your 5 lives which regenerate over time (8 minutes each). More lives can be purchased or you can always beg your friends to help you out.

To help encourage you to keep playing Diamond Dash will reward you with experience at the end of every game which increases your level. For every level players can expect to get a 1% score bonus and the occasional gift. 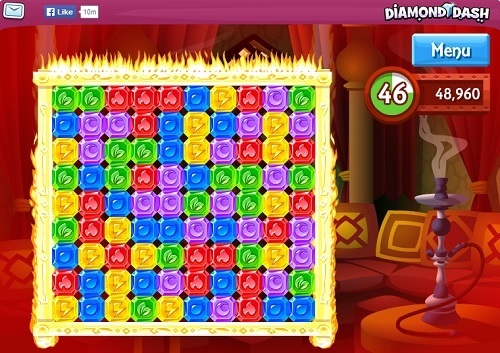 As you advance through levels you’ll gain new powers to push your high score even further from the Magic Fire ability that lets you blow up chunks of blocks if you create a fast enough clearing streak to the Magic Diamonds which will fill up over time and wipe out lines of gems at a time. Later on players will also unlock magical items to add more depth to the core offering.

While a very simple game, Diamond Dash quickly gets addicting as you try to beat your friends and others through the weekly leaderboard. Unfortunately it is let down by its long term appeal and the slow pace it introduces new mechanics.