Why settle for a simple cell growth io title when you can command a tank into battle against others on populated servers. The game can be played within the browser or one of the mobile apps (iOS and Android). 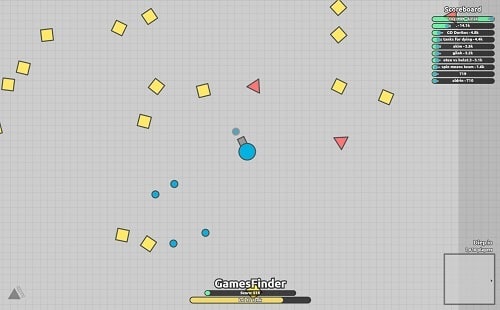 Similar to other io games players spawn as a simple avatar (in this case a tank) as they move around the world collecting levels by killing the stationary objects or other players. Uniquely diep.io does allow players to respawn at a reduced level should they meet their end rather than back at level 1 which does help counter completely over levelled and dominating players somewhat.

As your tank destroys the stationary polygon shapes of squares, triangles and pentagons you’ll earn experience, boosting your total score and from time to time your level. With each level you’ll gain a skill point to upgrade your tank in either health regeneration, max health, body damage, bullet speed, bullet penetration, bullet damage, reload and movement speed.

In addition every 15 levels you’ll get to choose a new tank class for your character which alters things like your cannons, field of view, rate of bullets and even provide some abilities at higher levels. 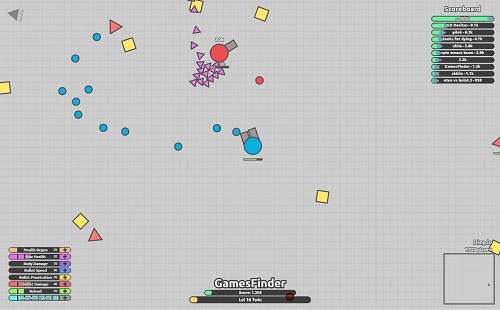 Both skill points and tiers are capped due to the max level of 45 which again prevents domination of a server given the hard cap to strength and the fact that certain builds can overcome others with ease, allowing players to scout out the current leader and build appropriately for victory.

The addition of these builds really allows diep.io to separate itself from similar titles out there and also ensures that each play through is different as you encounter new builds and try new ones yourself. If builds alone isn’t enough diep.io also offers alternative game modes to the usual free for fall with teams (2 and 4), domination, tag, maze and sandbox.

Games Finder is a Steam Curator and featured in the aggregate review scores data of MobyGames and Neoseeker.
FEATURED ON
Games Like Agar.io, Games Like Mini Militia, Games Like Slither.io, Games Like Transformice
LEAVE A REPLY Cancel Reply