Digimon World DS is a game that takes place in the Digimon universe and combines role playing elements with a Pokemon style of capture and training. The game was released in late 2006 for the Nintendo DS platform. 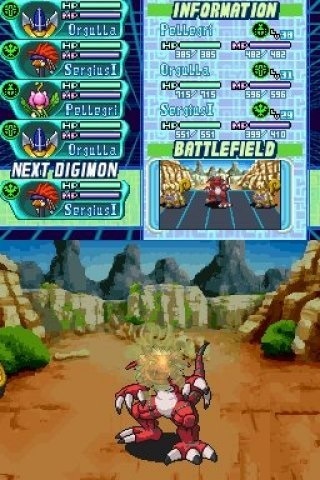 In Digimon World DS you will encounter all of your favourite Digimon along with a number of Digimon that make their first appearance in the game (this includes the evil boss Digimon).

Digimon World DS has over 250 different Digimon for players to use as they embark on the ultimate Digimon adventure. This adventure has you exploring the game world as you capture, train and digivolve a variety of Digimon to do battle and ultimately save the world from the evil known as Unknown-D.

The story takes place in current times were technological developments have created artificial life forms known is digital monsters in a digital world. You are intrigued by the recent rumours of these creatures and decide to enter your school’s computer lab to investigate further, which is when you are pulled into the strange digital world. The story for the game is fairly simple and not the strongest aspect of the game but does enough to serve as a much needed backdrop for your Digimon adventure.

Battles offer an extra layer of depth and strategy thanks to the unique dynamic battle system that emphasises the predicting off your opponent’s next attack. This system makes battles a lot more engaging and less repetitive than Pokemon where your battle options are fairly limited and mostly focused on simply selecting an attack move. 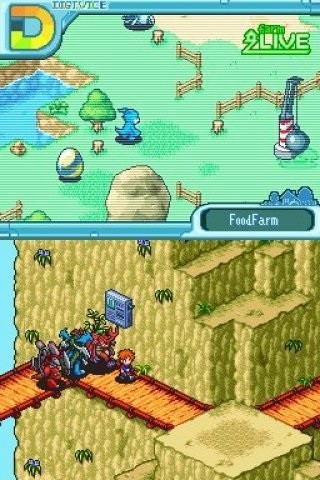 Raising Digimon is a careful process that requires more than just battling though, players must carefully manage a successful DIGI farm in order to raise Digimon effectively which is a neat addition to the RPG and monster battling game elements.

Digimon World DS is a great monster focused experience that will prove popular for both Digimon and Pokemon fans. The added WiFi options (3v3 battles and Digimon exchanges) make the game particularly fun with friends.