Taking away the majority of your buttons and leaving you with the ability to only dive and kick is the appropriately named Divekick. While you’ll grasp the mechanics within the first match, the psychological elements in outsmarting your opponent continues dozens of matches later and allows Divekick to dive into the heart of the fighting genre with a unique idea and mechanics that are brilliantly designed. 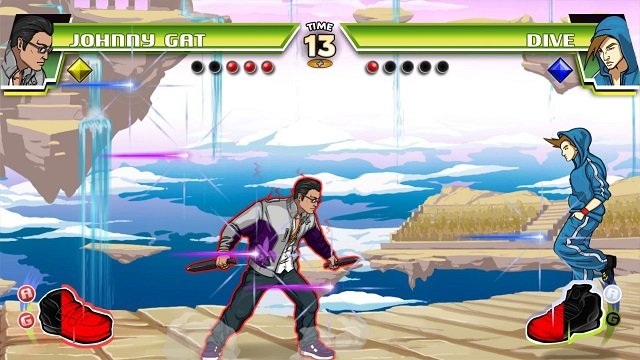 Based on an often abused mechanic in other fighting games the gameplay in Divekick revolves solely around performing the deadly dive kick. This parody of the genre does not end there though with countless inside jokes that fans of both the games and community of competitive fighting will pick up on and add that extra layer to the experience for those that follow the industry closely.

Programming two buttons to perform your dive and kick these are your only available options to attack, dodge and move in the arena. Your programmed dive button while on the ground will make your character perform a vertical jump while the kick button will see you perform a kick at angle towards the direction you’re facing. Alternatively by pressing the kick button while on the ground you’ll take a jump backwards allowing you precious time to reposition yourself. 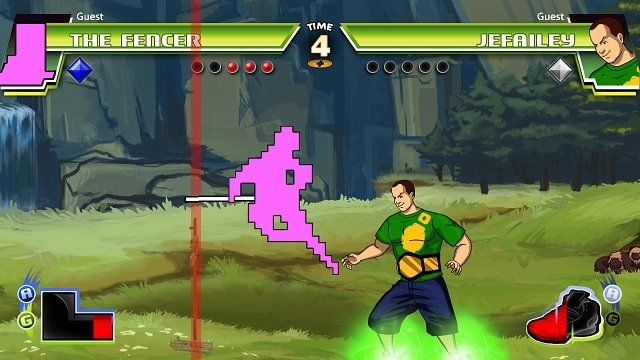 With only these two actions players need to get creative to overcome their combat opponent. Be it bating them into a false sense of security or going aggressive from the word go the community has developed various metas and counters overtime. Rounds are played as a best of 9 with 20 seconds to knock out your opponent (kicks are a one hit KO) otherwise the victory is awarded to the character closest to the starting line which means you can’t turtle indefinitely.

Said characters come in 15 different varieties with their own simple backstory that often mirrors fighters from other games or popular culture (such as the brothers Dive and Kick with a backstory based on The Prince of Bel-Air). Characters also come with their own stats for jump height, speed and even kick angle which makes some match ups difficult and adds that extra layer of longevity and game knowledge. 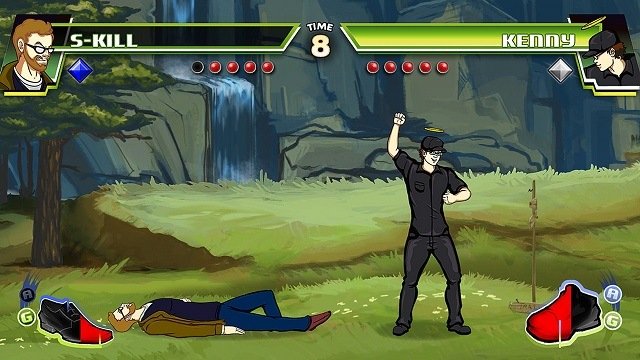 Other game mechanics in Divekick include the ability to select a gem to modify your kick speed, jump or kick meter by a small amount to help you offset a character weakness or boost a strength further. The Kick Factor meter which when full can boost your speed and jump significantly for a few seconds and a concussion mechanic where you’ll be temporarily slowed down at the start of the next round if your opponent causes a kick to the head that provides a nice reward for the player able to pull off the impressive achievement.

For the fighting game fan looking for something with a change of pace Dive Kick delivers a deceptively simple title with a wealth of underlying depth to dive into further.