Hack and slash your way through enemies in DmC: Devil May Cry the 2013 edition to the much loved action franchise. Step into the shoes of a young Dante in an alternative reality known as Limbo in an effort to bring the secret of the game world to light. 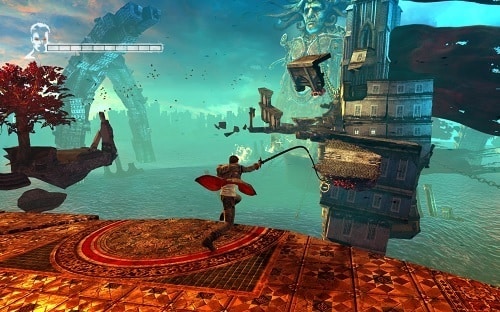 Your adventure is centred around Limbo City a modern city that is secretly controlled by a variety of powerful demons through the media and other human comforts. Dante lives on the outskirts of this society and is constantly hunted by demons and the civilian authorities. Early on you’ll make contact with Kat who belongs to The Order that is intent on bringing the truth of the demonic control to the public. In order to do this you’ll have to venture into the parallel plane of Limbo to do battle against demonic foes.

Gameplay stays fairly true to the previous Devil May Cry games with an extremely combo focused experience where you’ll dodge, grab, swing and shoot a range of enemies in over the top action style. The range of these combos is on par with the past games in the series and mastering them all is just as enjoyable as previous games. Combos in general are easier to combine together and all feel (and look) impressive.

While the game does away with the separate fighting styles that you might have enjoyed in other Devil May Cry games it replaces it with a simplified version that has you changing your weapons to combat certain enemies based on their colours for maximum damage. Switching is quick and with mixed waves of enemies you’re encouraged and rewarded for doing so.

There are a total of 8 weapons in total that you’ll unlock as you progress although some will only get limited use before being replaced with something better. Guns are particularly weak and makes them near useless which is slightly disappointing. 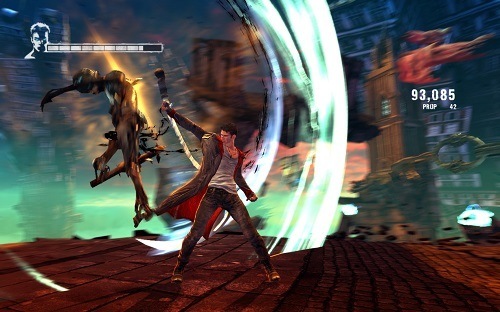 The speed and level of intensity of Devil May Cry matches that of previous games though and supported by a great soundtrack and strong camera that always seems to be positioned perfectly. This allows you to see all the environments and larger bosses in all their glory, creating the demonic atmosphere you expect from the series.

The simplified elements and slightly easier difficultly compared to other games make this one the most accessible of the franchise and perfect for first timers. It doesn’t completely alienate veterans though thanks to the huge range of difficulties that still provide the more traditional challenge of the series.

Games Finder is a Steam Curator and featured in the aggregate review scores data of MobyGames and Neoseeker.
FEATURED ON
Games Like God of War
LEAVE A REPLY Cancel Reply