Donkey Kong Country Returns brings the side scrolling franchise back onto modern day consoles with a Wii release (and subsequently 3DS). With enhanced graphics and hardware the possibilities in the Donkey Kong franchise have exploded to ensure the variety of gameplay is next to none. 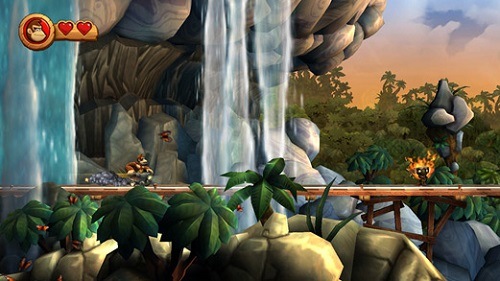 Your Donkey Kong story this time around explores the origins of the evil Tikis (Tiki Tak Tribe) that take control over the various inhabitants on the island. This new enemy replaces the Kremlings as the culprit for banana theft and sees Donkey Kong team up with Diddy Kong across 8 game worlds.

Contained within each of these worlds players traverse the environment and defeat the ending boss who has their own mechanics. With locations including ruins, caves, the beach, forest and even a volcano players are spoilt for visual variety.

All the traditional game aspects are present in this Donkey Kong addition with mine cart track levels, vine swinging, bananas to collect and the infamous KONG letters and puzzle pieces. New mechanics though include use of the foreground to expand levels further and even more secrets than before. Collecting Diddy Kong is still vital to level completion with his unique Barrel Jet (jetpack) to make further jumps while also offering a separate playable character within two player mode. 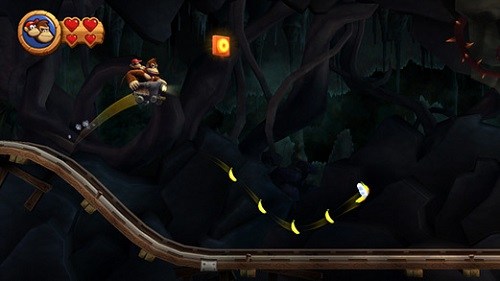 Donkey Kong Country Returns promises to take you back to the great memories of Donkey games long past, the fresh graphics, new mechanics and use of Wii controls make it one of the must own platform titles for both Wii and 3DS.