Rebooting the Doom franchise to new heights Doom (2016) is the first game in over a decade. Spawned on PS4, Xbox One, Windows and eventually the Nintendo Switch Doom is an exhilarating fast paced shooter with plenty of demon gore. Following a similar structure to the past Doom stories players step into the suit of an unnamed marine who is surrounded by the demons of Hell. Set on a colonised Mars players will explore a range of semi open ended levels as they literally run and gun down demons that stand between them and their given objective. Overall the gameplay is more akin to the original Doom 1 and Doom 2 titles than the slower more methodical horror of Doom 3.

The faster paced story follows your progression through the Union Aerospace Corporation research facility on Mars. Guided by Samuel Hayden who inhibits the body of an Android after his original body was lost to cancer. With Earth in desperate need of energy to solve a power crisis a portal to Hell has been opened and demons have began to spew forth.

Gameplay of Doom is designed to be exceedingly fast with players actively discouraged from taking cover or leaving combat. This is facilitated primarily through health and armour pickups that are tied to killing enemies and the general lack of cover in the game levels. Further health and armour can be extracted from kills by performing melee executions when demons reach low health.

While these melee attacks are devastating and wonderful to watch the bulk of your damage is still done through traditional weapons such as pistols, shotguns and the infamous BFG. These are slowly unlocked as you progress and can be further upgraded based on your needs along with upgrades to your suit and other systems. 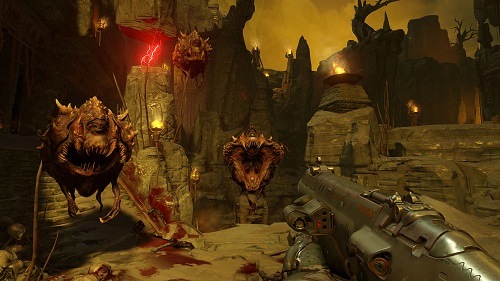 Enemy design is just as vast as the weapons you will use to dispatch them with some familiar ones returning from past games along with a host of new ones. While there is some different mechanics at play in each such as speed, wall climbing and projectiles the AI behaviour is quite limited overall.

The remade edition of Doom pays great homage to the franchise and accelerates it forward with extremely impressive combat, brutal melee kills and upgradeable weapons.

Games Finder is a Steam Curator and featured in the aggregate review scores data of MobyGames and Neoseeker.
FEATURED ON
Games Like Dead Space, Games Like Half Life, Games Like Halo
LEAVE A REPLY Cancel Reply