Having spent years developing the necessary technology to survive the destruction of the world the time has come to profit. Doomsday Clicker is a mobile title where you’ll serve as the supreme leader of the new world while blending idle game mechanics, clicker games and base building. 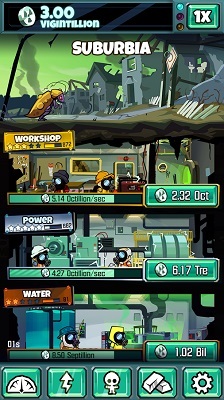 Ultimately your goal in Doomsday Clicker is to expand your underground shelter, allowing you to recruit more crazy characters to generate more coins and expand further. All the usual mechanics are included in Doomsday Clicker with bonuses based on your active gameplay, the ability to reset the game world (prestige/reset mechanic), a chance wheel to temporarily boost production and much more.

While the core is not much different from other idle clickers on the market the PikPok charm and high production values go a decent distance to making it more enjoyable than the saturated market mostly due to the good balance of active interaction with the game and then taking a step back to rely on the idle generation for a bit. The game achieves this with the likes of the booster spin every few hours as mentioned early in exchange for an ad watch. 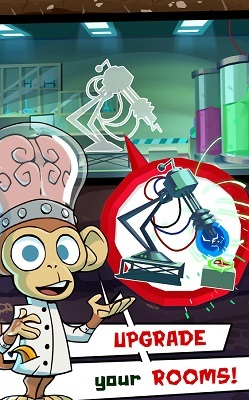 The best mechanic of the game though is no doubt its reset mechanic, something that only the very best of the genre get right and a class of games that Doomsday Clicker falls into. The system revolves around the use of a big red doomsday button which allows you to blow everything up and begin the game fresh. Your reward for doing so though is the mutants that are left behind that grant revenue bonuses. With players able to access this reset mechanic pretty quickly on its a great way to progress once you hit the wall of your current multiplier.

All of this is wrapped in the usual impressive flair of PikPok games with graphics, music building a very enjoyable experience that makes it hard to stop clicking.