Combining your typical browser RPG with the DBZ universe is Dragon Ball Z Online a game where you can create your very own Saiyan, Majin or Android and recruit your own allies to create a team of formidable fighters. 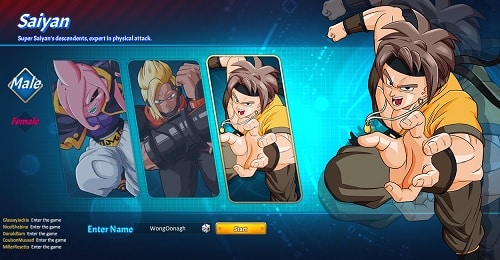 Based around the quest for the Dragon Balls Dragon Ball Z Online has all the recognisable traits of the franchise with characters and locations also having familiar elements. Before exploring this DBZ themed world though you’ll need to select your starting character and gender which serves as the games class system. You’ve got Saiyans that are the masters of physical attacks, Androids who specialise in defence and counter attacks and Majins that have impressive speed and focus on magical damage.

Once inside the world you’ll find yourself right next to Kid Goku and Master Roshi who will start you on your stage based quest. Each stage seems your character (and eventually team) face off against multiple enemies in the usual automatic battles.

Just like similar games this means your strategy lies within the team formation, skills and stats where you’ll have to select the appropriate characters to be in your vanguard (front line), assault (middle line) and support (back line). While you’ve got a large range of generic fighters to use there are also legendary warriors with includes the likes of Goku and Vegeta when you reach the higher levels. 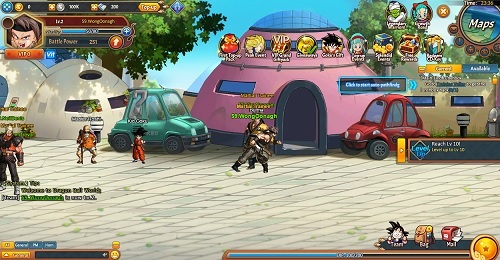 In order to reach these levels you’ll spend most of your time in PvE which has you bouncing around locations to accept quests and enter different stages. Dragon Ball Z Online doesn’t handle this part particularly well as you spend a lot of time back tracking and going through loading screens rather than grinding out levels in the automatic combat.

Ultimately this makes Dragon Ball Z Online a mediocre addition to the browser based RPG genre and one you’ll only be looking to play for the theme as there are plenty of better browser titles out there.

This review was first published on December 11, 2013. Read our update policy to learn more.

Games Finder is a Steam Curator and featured in the aggregate review scores data of MobyGames and Neoseeker.
FEATURED ON
Games Like League of Angels, Games Like Naruto Online, Games Like Wartune
LEAVE A REPLY Cancel Reply