Live the life of dungeon master in Dungeons 3, a game with clear inspirations but takes the management mechanics in its own direction. Gameplay includes a vast 20 mission campaign (co-op available) amongst a multiplayer skirmish mode and a survival format in the base game which is expanded further through several DLC releases. Set in a far off fantasy land players infect the mind of the dark elf priestess Thalya, convincing her to give into her dark urges and conquer the goodly game world and serve as your evil hero. With this quest in mind you’ll adventure throughout the world facing different situations, defeating leaders of the heroes and ultimately spreading darkness across the land as you leave a path of destruction. Each level offers this challenge in a different way with fantastic variety which includes the likes of base defence missions, escort missions and missions with various layers of sub objectives. A consistent theme though is slowly building up your dungeon of creatures before adventuring to the overworld although a small handful of levels provide pre-built dungeon designs.

Regardless of level a core gameplay mechanic is the use of two separate game maps that splits your underground dungeon and the surface world (inhabited by heroes) with dungeon entrances allowing you to move your Dungeons 3 units between these two areas. While the underground dungeon serves as your base where you’ll build rooms in order to care for the creatures that you’ll recruit to your dark cause your objectives often lay above ground requiring careful movement of troops or use of the magical portal spell to ensure you are sufficiently covering the map. One enjoyable presentation element here is watching the world above shift and transform into darkness after you claim the key locations that generate Evil for upgrades. Whether you’re managing your dungeon design underground or commanding your party of creatures above ground Dungeons 3 is an enjoyably evil experience. 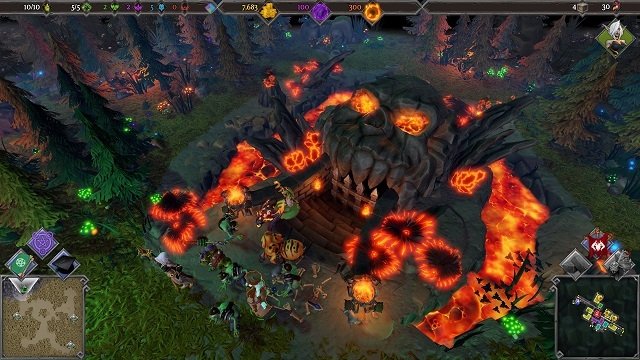 Creatures that you recruit can be either Horde, Undead or Void which each have their own uses and utilities to consider from combat prowess, production abilities and special mechanics around their death. Adjusting and balancing your army is always a key consideration to ensure you have a balanced fighting force (or imbalanced if that is the strategy you want to pursue). Dungeons 3 does a fantastic job of offering you multiple strategies in this department although the strength of some strategies makes it impossible to attempt otherwise on particular missions. Supporting these creatures is your faithful Little Snots that will gather gold and build out space for rooms that can upgrade your technology tree for new rooms, creatures, spells, traps and other rooms to defend against hero raids on the dungeon and your life force the dungeon heart.

On top of the core game Dungeons 3 has released several expansion packs to build on the campaign with additional unique campaign levels (although fundamental mechanics remain unchanged), added voice acting, new Thalya costumes and new evilness hubs which all feature fantastic designs to make the overworld feel that much more evil as you take it over. These new impressive designs make it even more enjoyable to claim every single point of interest for yourself and watch it transform into a twisted version of the original landmark. A brief overview of the individual DLCs is as follows: 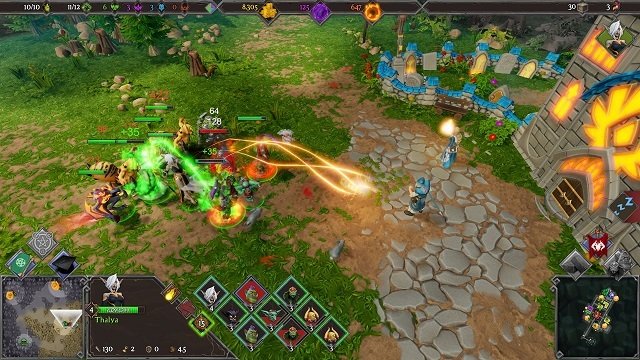 Once Upon A Time:
Once Upon A Time takes you through Fairyland to fight against The Good Fairy. The highlight of which is utilising hordes of explosive sheep to bring down her defences (or heroes that get in the way) in one of the new levels and introduces yet another mechanic to the Dungeons 3 experience. 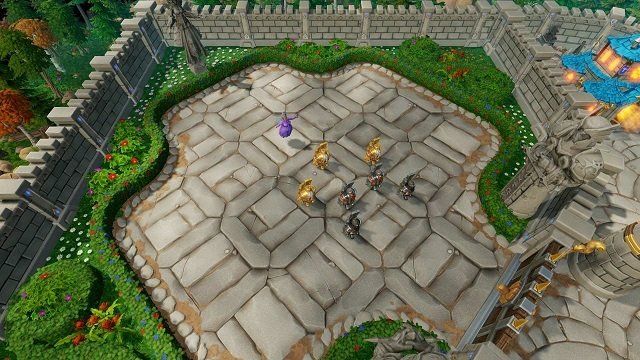 Evil of the Caribbean:
The second DLC release transforms Thalya into a pirate with 3 holiday themed campaign levels that see a relaxing trip to the paradise known as Turtoga resulting in smuggling rum and facing off against Cthollho, the tentacle creature. For those die hard Dungeons 3 fans the rum running level in particular is the toughest level to date when played on hellish with perfect timing and planning required to overcome (having a co-operative partner is particularly helpful). 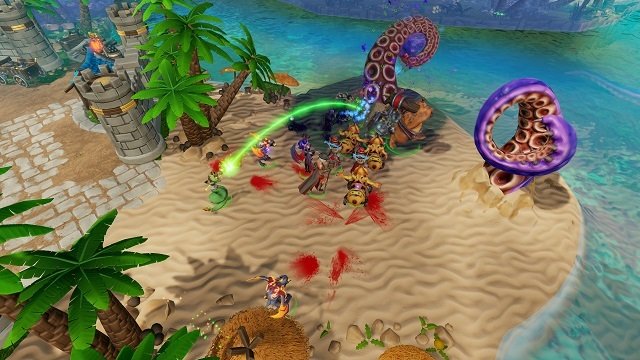 Lord of the Kings:
The third DLC offers you a taste of playing as the good guys with the opening level requiring players to summon heroes to push back the evilness and recapture the city of Strombreeze. Players will no doubt be thrown off guard by this level which despite not being the core gameplay of Dungeons 3 as it lacks any form of base building mechanic.

Instead during this campaign level players will generate gold to spend on recruiting heroes who can be further upgraded at certain weapon racks around the map, choosing which heroes to upgrade is both important and oddly satisfying as you fight through evil creatures with high level wizards who only a level before were the most deadly enemies a group could face.

No sooner have you reclaimed the lands though and you’ll be back in control of your familiar Thalya to reclaim them in the name of evil and resume the established dungeon building formula of the base game and past DLC expansions. Converted heroes are also a staple to these 3 new campaign levels and are central to your strategy in the last level in particular which adds some extra variety to the standard strategies you’ve mastered up to this point. 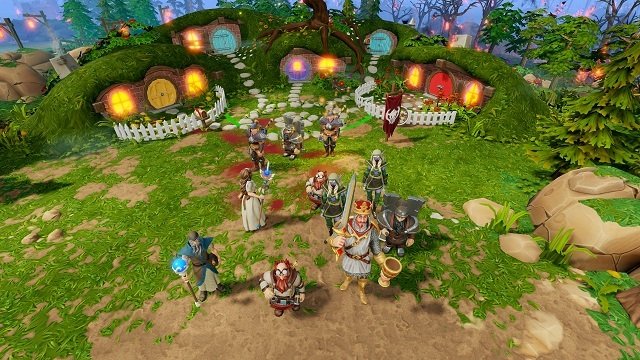 Clash of Gods:
The pinnacle of the Dungeons 3 experience lies within what we thought was going to be the final DLC at the time of its release, Clash of Gods. Fighting against the Goddess herself in this expansion to settle the score for once and for all players will also be greeted with a total of 8 new fully voice acted levels making it the most bountiful DLC to date. Under the scenes are even more improvements that make Clash of Gods mechanically challenging and adds more variety to the core gameplay loop that Dungeons 3 has utilised up until this point.

For instance spiders and heroes will now be more aggressive in their attacks by establishing bases underground, meaning that invading heroes and spider lairs can no longer go unchecked as they can quickly multiply. Additionally outposts have been added above ground where you can place your own defensive towers for overworld presence or construct statues instead that offer passive bonuses such as extra evilness generation or no horde payday. Clash of Gods also introduces some fresh spells and traps for you to try out different strategies to those you’ve used so far. 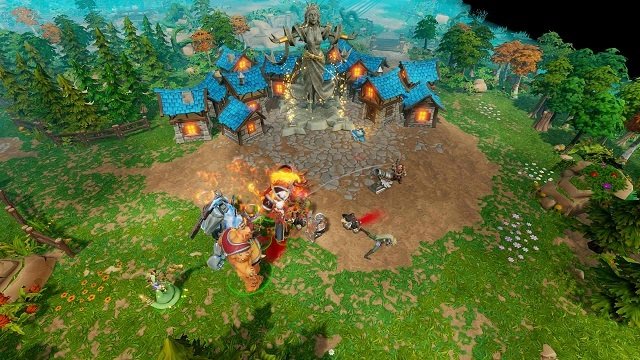 An Unexpected DLC:
As if all of that wasn’t enough An Unexpected DLC launched in February 2019 adding 3 more challenging maps alongside the story of the Queen of the Forest. A new enemy type known as the Rootling also joins the ranks of enemies although they are little more than an annoyance with limited health meaning they pose little long term threat to players. A special April event followed soon after known as the Golden Pickaxe event which you can read more about in our Golden Pickaxe Event location guide and will remain in the game indefinitely. With a new boss battle and pen pusher enemies you’ve got a fresh 3 level adventure in Famous Last Words (complete with their own golden pickaxe to collect). The three levels themselves are fairly challenging and likely to give all Dungeons 3 fans a difficult time due to the Narrator’s powerful abilities to blow up parts of your dungeon while summoning heroes which combines with the vast random encounters underground to have you constantly pressured. 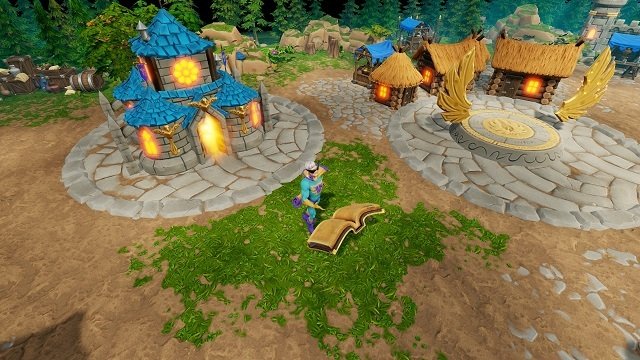 A Multitude of Maps:
Just when many thought that Dungeons 3 was done with DLC releases an additional 3 skirmish map challenges landed in February 2020. At the same price as other DLC additions it’s no doubt on the higher side in terms of cost but the maps provide an ample challenge for the Dungeon 3 fan while providing an excuse to step back into the evil realm with some modified mechanics. 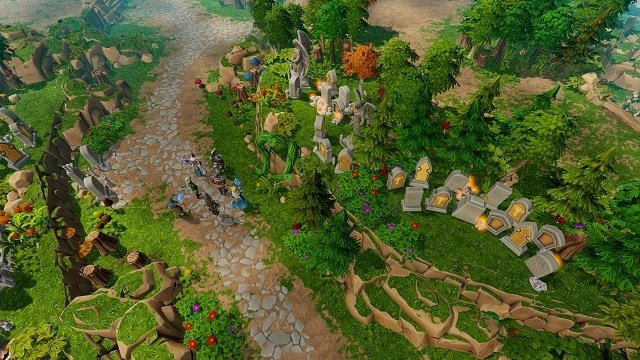 While the core Dungeons 3 game is a fantastic stand alone experience true evil dungeon masters won’t be able to resist the additional DLC levels for the additional mechanics, variety and enemies that they offer.

Games Finder is a Steam Curator and featured in the aggregate review scores data of MobyGames and Neoseeker.
FEATURED ON
Games Like Dungeon Keeper, Games Like Evil Genius
LEAVE A REPLY Cancel Reply