Sending players on a journey to save their village with long lost powers of turret construction Dwerve is a title that has a familiar setting and design elements while offering a unique combat premise. Released in May 2022 for Windows, Linux and Mac players take control of Dwerve the dwarf as he adventures out from his home of Brekka Village to stop a troll invasion with allies he meets along the way.

Set in a world where dwarves were once a powerful race that established themselves in the mountain of Mount Crowcrest you’ll join this world with them now taking refuge above ground. After digging deep for power stones the dwarven nation fell to ruin though when they encountered dark creatures and the troll race which serve as the main protagonist of the story adventure in Dwerve. This adventure of Dwerve begins with players being knocked out while adventuring alone and waking up in your family home being scolded by your father for adventuring. While you aren’t the powerful warrior that your father is players soon learn of the power stones from Esben that turns you into a Warsmith like the dwarves of eras long past. These Warsmith powers allow players to quickly construct traps and turrets to attack enemies to fight hundreds of enemies with strategic placement.

After acquiring this Warsmith power and testing them out players are quickly thrown into the story of Dwerve which opens with a troll invasion on Brekka Village. This sets off a series of events that lead you deep into abandoned dwarven settlements now overrun with trolls who are planning for an overworld invasion with the support of the Witch-Queen Vandra. Ultimately players find themselves exploring a familiar set of fantasy tropes which are presented with a wonderful art style across both large and small details. 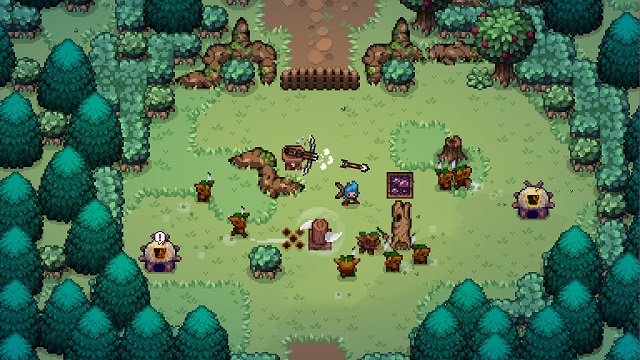 Beyond exploring every inch of the game world you’ll engage in combat against a diverse roster of creatures and trolls. From the rats and spiders that quickly move around the map to the slow powerful ogre that has devastating attack power and high health the world is full of enemies. Unlike the Zelda-like games that have clearly inspired Dwerve though you won’t be engaging with these enemies directly and instead building an equally diverse roster of traps to stand in between you and the enemy. Utilising these requires a touch of strategy as fights take place in self contained areas of the broader game map where players carefully position themselves and traps.

Be it the initial spinblade turret and tar trap or the advanced mortar, punch or tesla turret that you’ll unlock later in your adventure each has their own slight attack variation. The spinblade for example is a reliable close ranged damage dealer although quickly countered by ranged attackers which requires players to build their own arrow turrets to counter them. Through the mid to late game in particular you’ll have even more utility to consider with turrets that chain attacks, pull enemies closer, knocks them off the map or stuns them. Each of these elements along with boosts to survivability or general damage are also available through your mysterious companion Sla in exchange for cogs from the world, fallen enemies and treasure chests. 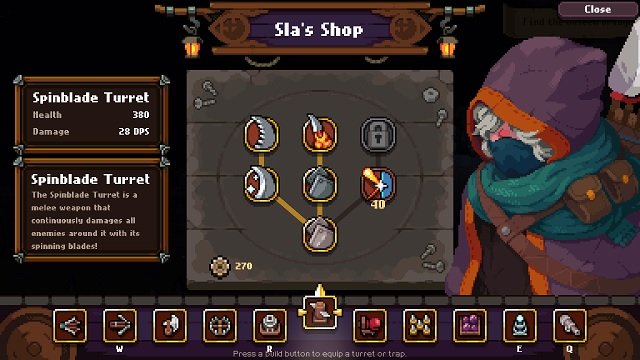 While unlocking new turrets is slow to begin with in Dwerve you’ll quickly be given a new turret after every major story advancement to give you a new tool to experiment with. Some do have significant overlap without a clear difference between them though that relegates some to gather dust after only a single use. Combined with your limited turret slots, power stones and cogs upgrade currency Dwerve players will quickly gravitate to a small pool of favourites for most battles which does feel like a waste of your expansive options at times unless you force yourself to regularly swap your loadout.

Dwerve can also call on some artefacts that provide you some basic offensive and defensive abilities although don’t replace your turrets in combat. Most notably is a dash that lets you explore faster or move through your turrets when you need to reposition in fights. Some of these artefacts such as upgrading your dash to leave a wake of fire are also tied to the fantastic boss battles that bring new mechanical challenges and require faster reflexes than regular combat encounters. A smaller number of stealth sequences also appear as part of the storyline along with basic environmental puzzles to provide players those slower moments for story pacing. The stealth sequences in particular offer little room for error and can feel a little awkward to pass but do make sense in the broader narrative.

Dwerve offers a familiar adventure foundation as you build yourself from humble beginnings to become the solo saviour of the beautifully presented fantasy lands. What will truly draw you in though is the shift to tower defence combat that elevates Dwerve above it’s Zelda style RPG peers.

This review was first published on May 30, 2022. Read our update policy to learn more.

Games Finder is a Steam Curator and featured in the aggregate review scores data of MobyGames and Neoseeker.
FEATURED ON
Games Like Bastion, Games Like Zelda, Games Like Zenonia
LEAVE A REPLY Cancel Reply