Enslaved: Odyssey to the West is a platform adventure with action elements which originally launched for consoles (PlayStation 3 and Xbox 360) in 2010. The title was eventually brought to Windows gamers in 2013 and through backwards compatibility in 2019 made available to newer Xbox consoles. Loosely based on the popular novel Journey to the West it promises quite the adventure over 10 to 20 hours depending on the amount of side content you explore.

Enslaved: Odyssey to the West is a re-imagining of the original novel and takes the story out of China to a post-apocalyptic world 150 years in the future with nature starting to retake the land that humans claimed for thousands of years. Now with a much smaller population humans only play a small part in the game world given it is now dominated by the war machines of our past civilisations. Known as Mechs these robots still follow their original protocols which now sees them aiming to eliminate all humans and accordingly avoided at all costs. 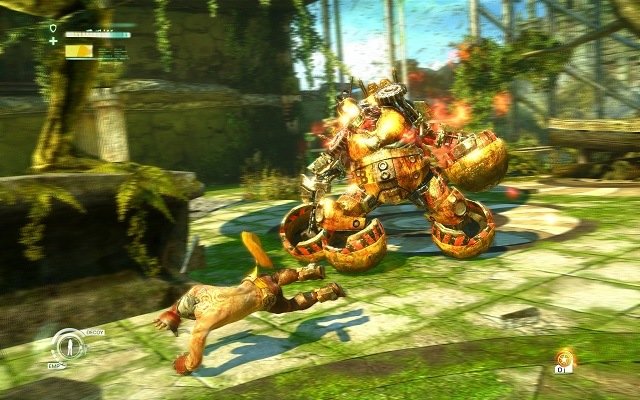 In this post-apocalyptic themed action adventure you’ll play as Monkey (representing the Monkey King) after he escapes from a prison ship with Trip through the escape pods just prior to a crash.  After their escape Trip places a slave headband onto Monkey while unconscious which then forces players to protect her as her death will result in your own. With Trip fixated on returning to her home village which lies on the other side of the abandoned New York City players embark on their adventure through the post-apocalyptic game world helping Trip under the promise of removing the headband at completion.

During this journey players are also bombarded with memories from the past world through the headband which seems to be malfunctioning. Players also meet a number of other NPC characters that further expand the game world and in the process ultimately uncover a mech plot to construct the Leviathan which is a giant mech that will ensure the doom of the human population if completed. This redirects the players attention and keeps them fighting alongside Trip beyond the initial promise which results in the story twisting into something unexpected. 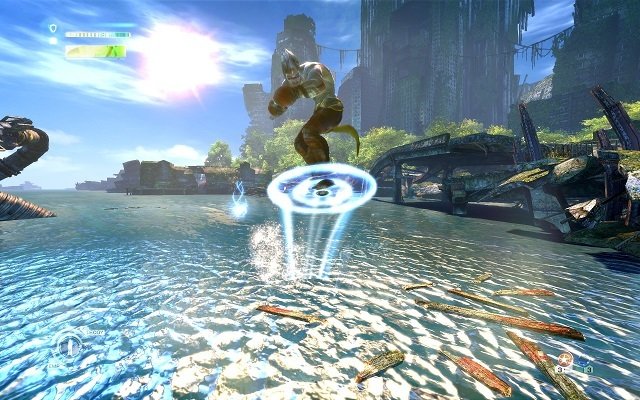 Enslaved: Odyssey to the West is primarily a third person action adventure and thus adopts a third person perspective as you platform around the environment while combating the various mechs that you’ll encounter. Monkey is designed as an extremely mobile character which is shown across platforming and combat which ensures your experience is a fast paced one from start to end.

Armed with a staff and shield the player has plenty of combat abilities to stun, dodge and damage enemies which also combine with a solid number of devastating finishing moves to employ against low health mech targets. Trip will also provide basic support from time to time and she’ll always be near you’re side but this is generally defensive in nature such as her small handheld EMP device that stuns enemies that get close to her that does also make her a viable distraction. 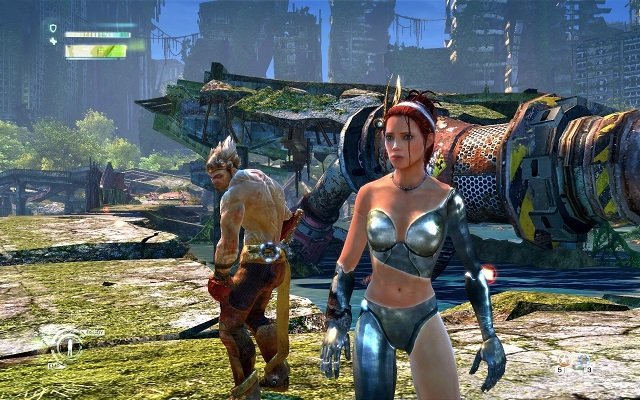 Trip is also a capable programmer of old technology which gives her scouting capabilities through a dragonfly camera that can identify enemy patrols and help you understand their weaknesses before you initiate an attack or sneak past them entirely. In addition this core combat loop Monkey will have to solve various platforming and puzzle sequences which help to split up the gameplay between battles. Puzzles may also require you to utilise Trip from time to time which generally lead to caches of Tech Orbs that she can use to upgrade your upgrade.

While these upgrades are basic in nature they are vital to your game progression with players selecting from combat, health, shield and staff categories. From new attack patterns, increased health, passive healing, improved shield recharge, faster attacks and many other Monkey tweaks players can create their own preferred fighter for the story.

Games Finder is a Steam Curator and featured in the aggregate review scores data of MobyGames and Neoseeker.
FEATURED ON
Games Like Horizon Zero Dawn, Games Like Prince of Persia, Games Like The Last of Us, Games Like Uncharted
LEAVE A REPLY Cancel Reply

Enslaved: Odyssey to the West