Available for free on mobile devices and as a paid title on Steam Evil Defenders offers an impressive tower defence experience with an emphasis on multi layered difficultly, vast technology tree to upgrade and a lengthy campaign adventure. It’s a mixed approach that sees some minor changes between game versions but are otherwise fundamentally the same experience. 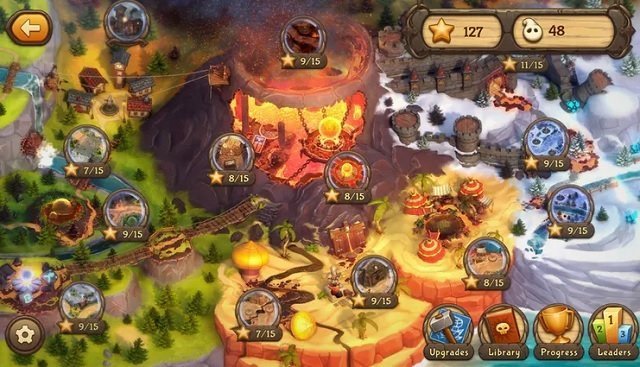 Starting with a basic level called the River Pass which also serves as your Evil Defenders tutorial you’ll be taken through the familiar mechanics of a tower defence game and how Evil Defenders applies its own spin on things. Evil Defenders stays close to this formula for the most part while establishing a setting of pushing back invaders from invading your territory with your evil themed towers.

Where Evil Defenders invests in differentiating itself from others in the genre is in the way it approaches tower variety, upgrades and number of levels. On the tower front you’ll have familiar favourites such as the Orc Cannon that is slow firing but a devastating  unit that can deal area of effect damage based around a central contract point. This combines perfectly with another early tower the Old Crypt which creates skeletons to slow down attackers and provides the foundation of a deadly combo that will serve you well until more towers are unlocked through the campaign such as the Crossbow Goblin and Poison Lord. 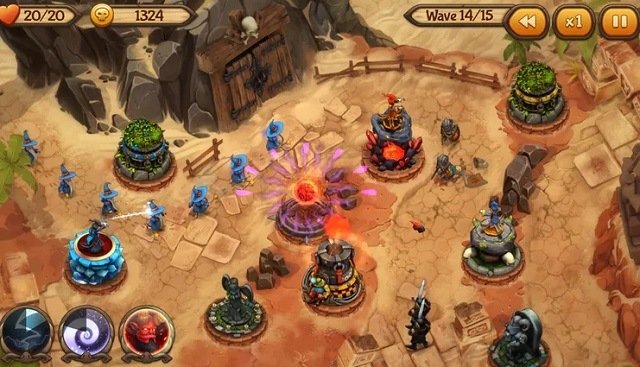 In total there are 60 tower variants a number that far surpasses similar games in number. While an impressive achievement it almost feels like too many towers and can actually be overwhelming to understand all your options as well as test them out in levels to find a preferred combination particularly for the more casual tower defence gamer.

Evil Defenders has a few other unique tricks that make it an attractive option for tower defence gameplay though which includes interaction with the landmarks of each level (such as the water in your tutorial level that slows down units). Along with the ability to speed up gameplay up to 4x (surprisingly missing in most tower defence games on mobile), cooldown based abilities and a massive tech tree to explore. Further to this each level offers a total of 6 different difficulty levels and 90 separate levels for improving your strategy in Evil Defenders. 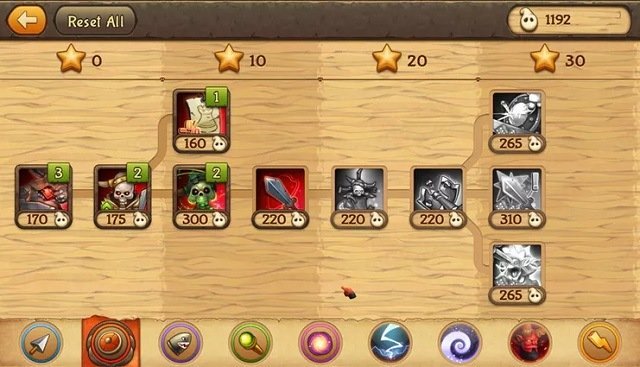 Accordingly Evil Defenders is best suited to the die hard tower defence fan that wants a game with longevity and experimentation but does not mind a bit of a grind through multiple difficulty levels to ensure they are appropriately upgraded to conquer game levels. Meanwhile more casually minded players are likely to see some frustration from the overwhelming number of towers and required grind for unlocks to advance.