Developed as a real time strategy game and released in 2014 through the Steam Early Access Program is Factorio a game all about taking basic parts and building upon them again and again to create a thriving society. 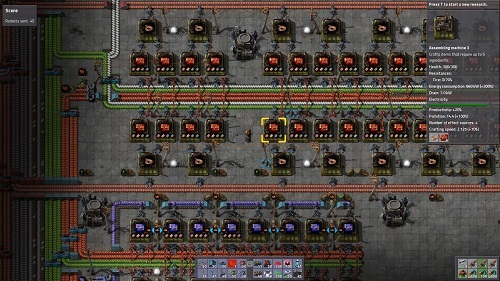 The idea behind Factorio revolves around a crash landed man on a far off alien planet who must rely on the resources contained on the planet to build a rocket. The game design promotes open ended gameplay with players able to achieve this goal (or even ignore it) however they wish in single player and multiplayer modes.

Constructing said rocket is no easy task, requiring a significant amount of resources to complete and can only be achieved with efficient factory design to acquire such resources. Given this objective Factorio is at its core a resource management and acquisition game with randomisation and alien attacks to give the player extra added depth.

With aliens sharing the same planet time is of the essence as you try to not only acquire the resources but also survive attacks. As is traditional for strategy titles players start with the basics, slowly building up resources that can in turn create tools and machines to produce more advanced technologies to assist you harvest resources even more efficiently. In Factorio this is taken one step further with players designing their settlement for automatic assembly lines to drive production, mining, transport and the final assembly of products you need (oil, drones, armour). 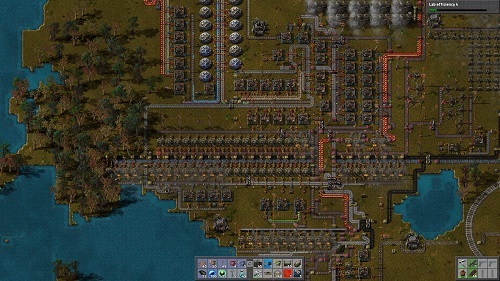 Building all of this within your factory borders players will attract ever increasing aggressive alien attacks that need to be defended against by funnelling resources into automated defences.

The unique focus of automation alongside traditional strategy elements makes running your own factory like colony an experience that you can dive into again and again.

Games Finder is a Steam Curator and featured in the aggregate review scores data of MobyGames and Neoseeker.
FEATURED ON
Games Like Dwarf Fortress, Games Like RimWorld
LEAVE A REPLY Cancel Reply