Fallout: New Vegas adds another impressive RPG experience to the Fallout franchise with an action role playing title that is packed full of content. Exploring the wasteland that is the Mojave Desert players will meet countless enemies, NPCs and side quests throughout the Las Vegas area. Developed by Obsidian Entertainment and released in 2010 Fallout: New Vegas remains a fan favourite of the Fallout franchise and Obsidian developed games.

Like many open world RPGs since it’s original release Fallout: New Vegas has since seen many downloadable content releases which have built on the core gameplay with new areas, weapons, quests and enemies. These extra bits of content have been combined into an ‘Ultimate Edition’ which is a must purchase if you decide to venture into the world of New Vegas and given the age of the game does not introduce significant additional cost. While these packs primarily offer standalone adventures these additional DLCs also increase the level cap or improve the starting equipment of the core adventure. 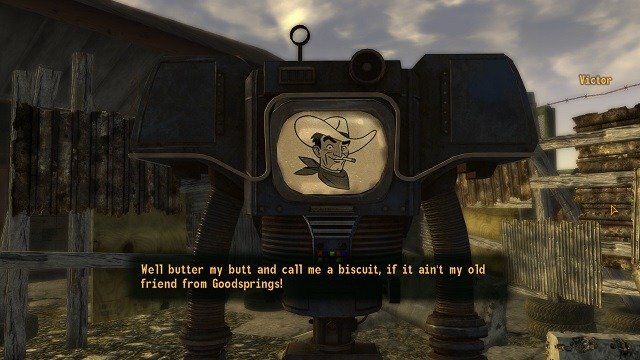 Like previous games in the Fallout series the game takes place in a post apocalyptic environment and this time centres around the areas surrounding current day Las Vegas. Players assume the role of a Courier who is hired to deliver a mysterious package across the wasteland only to be shot in the head and left for dead by some unknown attackers. After waking up from your near death experience you swear to track down the assailants for revenge which begins your journey into the surrounding wasteland.

Just like in Fallout 3 players can set their initial S.P.E.C.I.A.L. stats, skills and perks to create their own unique character with strengths and weaknesses that suit your desired playstyle and can adjust these overtime as you gain experience. Common playstyles include pistols, melee weapons, assault rifles, sniper, shotguns, heavy weapons or energy weapons that have appropriate passive and active perks to increase their power. 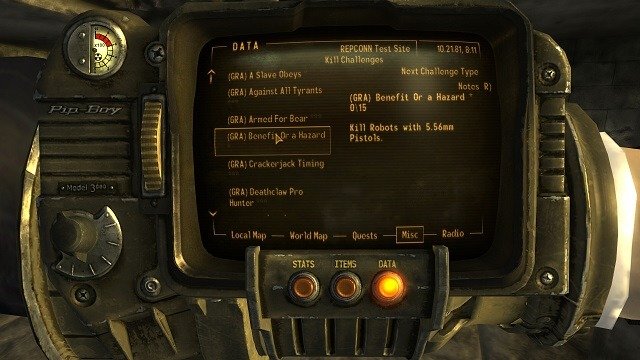 Players will also find themselves using the familiar V.A.T.S. system once again which allows players to pause combat to target specific body parts for maximum effect. Given the still less than fantastic gunplay of the Fallout franchise (something that was finally addressed in Fallout 4) this serves as a useful backup mechanic regardless of your playstyle. Returning, expanded or new mechanics in Fallout: New Vegas include weapon modding, crafting, plant harvesting, karma and companions.

The karma system is central to the Fallout experience and returns from previous Fallout games along with a new faction specific reputation system which changes how the individual factions of the New Vegas landscape perceive you. This is particularly important for the main factions of New California Republic (NCR), Caesar’s Legion, Mr House and Yes Man who eventually must be sided with at the later stages of the game. Given the setting players can also visit the rebuilt Vegas strip where they can engage in a number of casino games to improve their wallet of caps which are even impacted by the players luck skill provided its high enough. This also links in closely to the card game of Caravan that can be played with merchants across the Mojave Desert for caps. 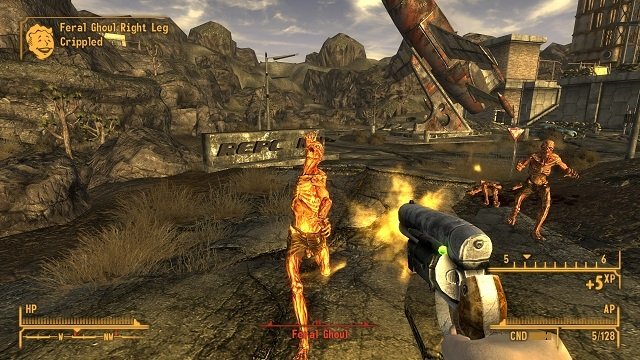 For those not satisfied with the core challenge a hardcore game mode enhances the difficulty. On this hardcore mode players have many healing restrictions placed on them, ammunition is given a weight value and the player must carefully manage food, water and sleep to prevent exhaustion. Alternatively the game mod community offers a vibrant collection of various modes to alter a second playthrough entirely.

This review was first published on January 13, 2014. Read our update policy to learn more.