Fallout Shelter brings the Fallout franchise to mobile platforms with a vault management game that has players fighting off raids, scavenging the wasteland for resources and even growing their population through child birth. Released in mid 2015 to boost hype around the soon to launch Fallout 4, the game has been able to gross millions in revenue while jumping up the ranks in the respective stores. 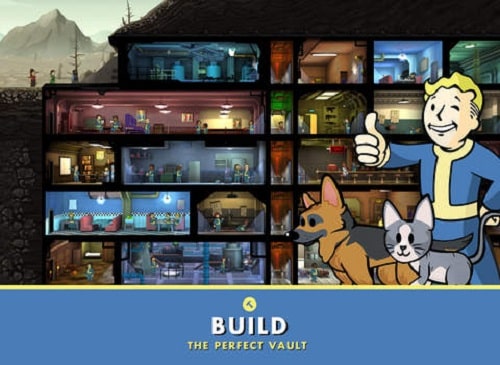 Your objective in Fallout Shelter is to manage your own vault, a shelter within the Fallout universe that was created to house some of the population during a nuclear fallout event. Players won’t find any of the crazy experiments that were performed on inhabitants within the vaults in the main game franchise but there is still plenty of management involved in the lives of your vault dwellers.

This management requires players to carefully manage their resources of water, food and power by building the necessary resource generating rooms and assigning appropriate personnel to them. To determine which personnel are appropriate players will need to consider each characters SPECIAL stats which is borrowed from the core game franchise. This acronym stands for strength, perception, endurance, charisma, intelligence, agility and luck, strength for example improves power generation while agility is good for rooms that generate food. By carefully considering each individuals statistics, placing them in appropriate rooms and eventually training them further in your desired SPECIAL attribute you can make a highly efficient operation.

Unlike other freemium titles players can not spend real money to boost the time that these rooms generate their given resource, although those willing to take a chance can use the rush mechanic which gives a chance to generate resources instantly but has the risk of failure causing things like fires or radroach infestations. 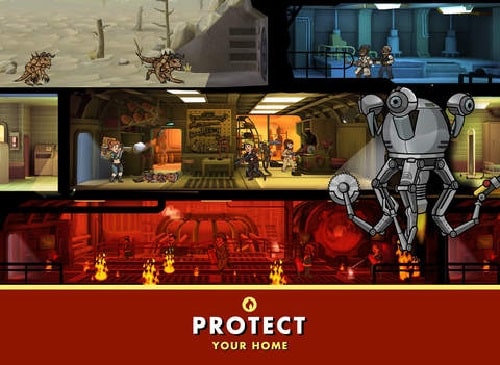 Radroach infestations are particularly deadly although pale in comparison to raider attacks which sees small groups of bandits coming into your vault to harass and kill your workers. This is where the very light RPG mechanics come into play with each character able to equip a weapon and armour piece to help them in combat.

Combat can also take place outside the vault although is less involved and requires you to send a selected dweller outside on an adventure. The longer this adventure the more helpful items and money (caps) they’ll collect but will face increasingly tough competition at the same time. Players can see a log of their adventure in the wasteland and also call them back to the vault.

Games Finder is a Steam Curator and featured in the aggregate review scores data of MobyGames and Neoseeker.
FEATURED ON
Games Like This War of Mine, Games Like Tiny Tower
LEAVE A REPLY Cancel Reply