Family Guy: The Quest for Stuff joins The Simpsons: Tapped Out in the world of freemium building games with a cartoon tie in. In turn providing a game for fans of the show and the mobile gaming scene which allows the m to create their own customised Quahog town and fill it with your favourite characters. Family Guy: The Quest for Stuff is a complete experience with a wide breadth of characters from the popular TV series making appearances and a typical over the top Family Guy story line to enjoy. 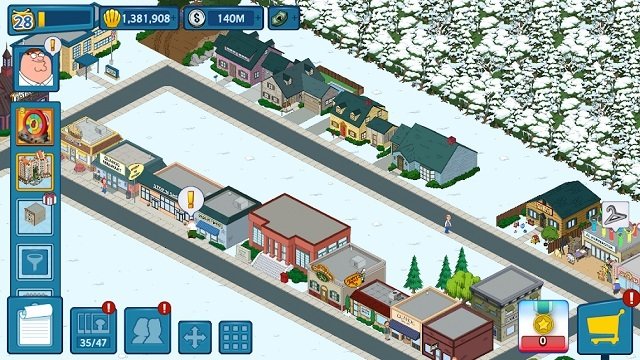 Set in Quahog after Peter and Ernie The Giant Chicken have a massive fight that destroys the entire town you’ll control lead character Peter Griffin as he attempts to rebuild one quest, character and building at a time. With Quahog as your blank canvas players are able to select buildings and characters to fill up the space albeit some of this progressions is restricted in some form (such as limiting the location of certain buildings or restricting the order of certain events). Additionally pirate, chicken and other invasions will happen periodically which requires your band of Family Guy characters to stand up for the city you’ve rebuilt.

Unlocking these buildings and characters follows a recurring gameplay loop that revolves around building a specific house which is tied to a specific game character. In order to unlock the character you’ll need to first build their house by accumulating resources before completing other resource and time based tasks to officially collect them. Such tasks are easy to activate and can be completed in a few seconds (such as Chris picking his nose) or can be hour long affairs that require interaction with multiple characters in sequence. Every action will also earn you some experience for that character and in game currency to spend on new buildings or decorations to bring Quahog back to life. 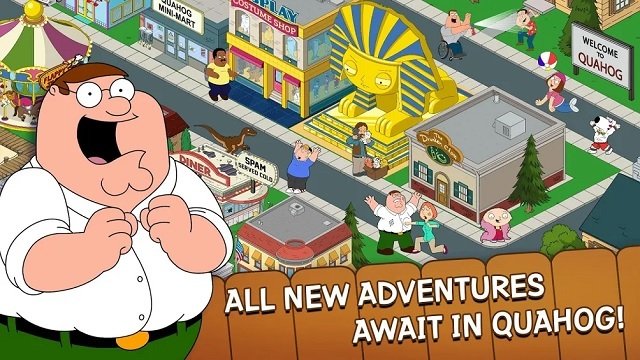 As a result the core quest lines can quickly feel generic although being backed by your favourite Family Guy characters definitely ensures Family Guy: The Quest for Stuff remains interesting. Another element of making this gameplay loop uniquely Family Guy is the hilarious customisable outfits that allow you to dress characters outside of their traditional clothing (such as Bikini-Clad Quagmire), Peter themed decorations and hundreds of animations for your characters which combined ensure there is always something to chase.

While Family Guy: The Quest for Stuff doesn’t do away with wait timers which are standard for the genre the above mentioned extras can help hide the underlying wait times that you’ll experience. Also as standard players will find a game shop and premium clam currency to do away with these completely should players be so inclined. 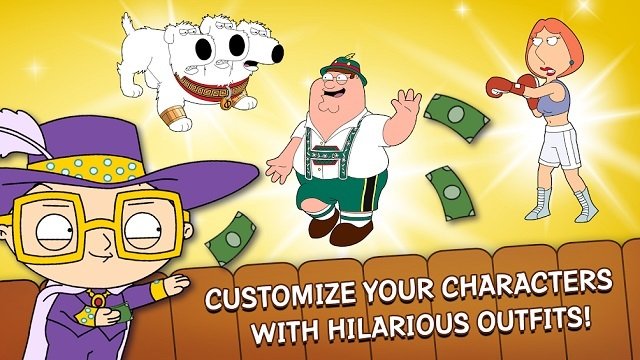 If you love Family Guy you’ll no doubt enjoy the adventure as it captures the over the top humour that Family Guy is known for while integrating nearly all the series characters into a mobile game. Important to note though that this does mean that Family Guy: The Quest for Stuff has more structure and therefore limitations than similar titles and may be a deal breaker if you aren’t hooked on the cartoon series.

Games Finder is a Steam Curator and featured in the aggregate review scores data of MobyGames and Neoseeker.
FEATURED ON
Games Like The Simpsons Tapped Out
LEAVE A REPLY Cancel Reply

Family Guy: The Quest for Stuff