If you like open world games but also enjoy them with plenty of shooter action as part of the core gameplay loop you’ll love what Far Cry 3 brings to the table with vast strides over the previous entries in the franchise. The game is the third in the series of open world shooters and mixes a number of different genres together which has proved a successful formula with gamers and critics across the games released so far and continues with Far Cry 3. 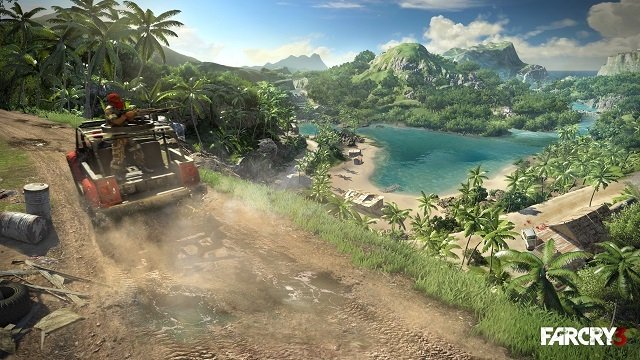 Far Cry 3 uses a first person perspective and takes place on a tropical island that is fictional and controlled by pirates who are heavily fortified across the island. The player is free to explore the entire island as they please for the most part while they attempt to save their friends and ultimately get off the island completely. In achieving these goals and following along the story or side missions players can focus on creating large firefights or relying on stealth tactics for success or use a mixture of both depending on the situation at hand.

Despite the FPS focus Far Cry 3 goes beyond a simple FPS with some light role playing features under the hood along with a world that is designed more like Grand Theft Auto than your traditional FPS. These light RPG mechanics includes equipment that can be upgraded provided players have the necessary materials from the environment (animals, plants and enemies) such as boar hides to increase their ammunition pouch. Other equipment upgrades includes a rucksack, wallet, arrow quiver, explosives pouch and weapon holster. Weapons are similarly upgradeable with basic options to add suppressors, extended magazines and different scopes to suit your intended playstyle. Weapons include the usual array one would expect with pistols, shotguns, assault rifles, SMGs, explosives and for the first time in a Far Cry game the recurve bow. 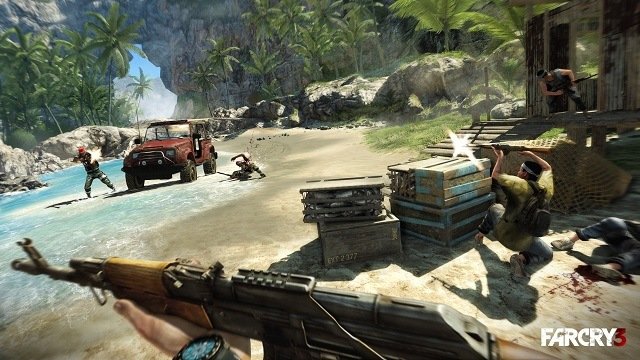 Skills round out out the RPG mechanics in play in Far Cry 3 with players able to increase the main character’s (Jason) skills in three trees that focus on long range, assault and stealth respectively. Offering a mixture of quality of life and passive buffs players can expect to find things like improved hipfire accuracy, reload while aiming down a sight, reduced fall damage, steady scopes for longer, faster healing, faster reloading, improved plant harvest and many more. Some of these also have pre-requisites from performing certain actions, specific quests or activities along with collecting rare relics.

Much of this playstyle will come through during the huge list of Far Cry 3 side missions which take you across the island and landmarks it has to offer and can be completed at your own pace alongside the core adventure. Far Cry 3 does a particularly good job in the department of choice here by ensuring there is a framework for players to investigate alternative means to resolve quests but doesn’t stop you just going in guns blazing if preferred all the time. 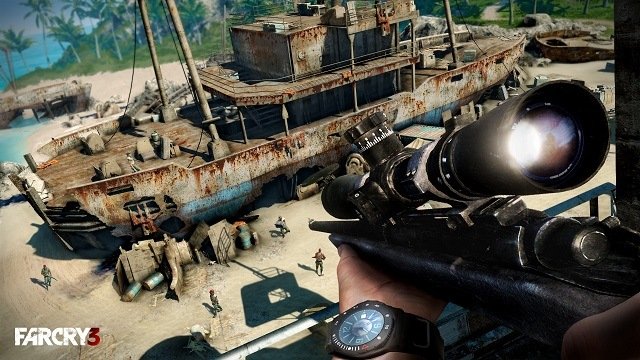 The island of Far Cry 3 during these questing adventures is fairly dynamic and reacts to actions by the player, for example if you clear out enemies from their outpost you can push them off their territory to create a safe haven. This steady progression also ties into your access to equipment purchase and crafting to provide a progression curve alongside the characters you’ll meet and converse with which number around a dozen key players. Due to the size of the Far Cry 3 island a number of transport options which includes a helicopter, parachute, cars, cargo trick and patrol boat with some having weapons attached.

This review was first published on September 24, 2014. Read our update policy to learn more.