Joining the other Far Cry titles but putting a prehistoric twist on it is Far Cry Primal a title available across Windows, Xbox One and PlayStation 4. Intended to be a spiritual predecessor to the games in the Far Cry franchise you’ll step back in time to take on the role of a hunter in a large world from the past.

Not only are you responsible for yourself but also an entire tribe who you will guide with upgrades and crafting to survive the harsh environments. It’s a twist uncharted by the Far Cry franchise previously but does a wonderful job of transferring the mechanics of Far Cry and weaving them into a prehistoric age. 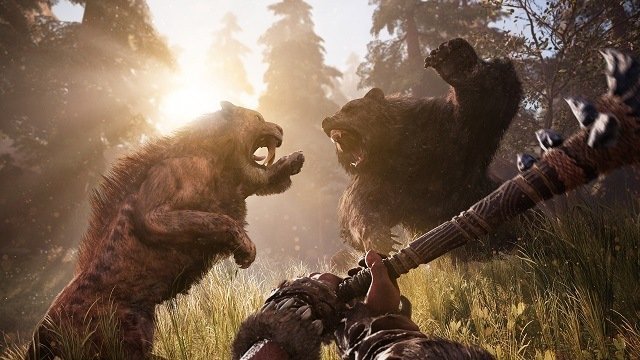 This past era adopted by Far Cry is approximately 10,000 BC at the start of the Mesolithic period with players exploring a fictional location based within Europe. With the world filled with a large range of fauna and flora from the past players will encounter wildlife such us mammoths, lions, rhinos, saber-toothed tiger and more familiar animals like bears and deers.

These animals are not just for hunting though with players being able to obtain resources from them and even tame them for transportation or help in your adventures. The tamed wildlife works alongside your consistent friend an owl spirit animal who offers scouting benefits and with upgrades throughout the campaign can eventually be used as an assassination tool.

Using this and every other tool at your disposal is absolutely vital as everything in Far Cry Primal is designed to kill you in one way or another which makes survival a constant threat, particularly early on before you establish a footing in the game world. Far Cry Primal still does a great job at staying challenging throughout with new threats and experiences that match your growing skills and arsenal as the game advances.

For this adventure players will be playing as a hunter known as Takkar who starts out unarmed but eventually rises up to become the leader of his tribe for his in game actions. This journey from humble beginnings starts after the hunting party that you are in is ambushed with Takkar vowing to restore the once powerful Wenja tribe to their seat of power in Europe. 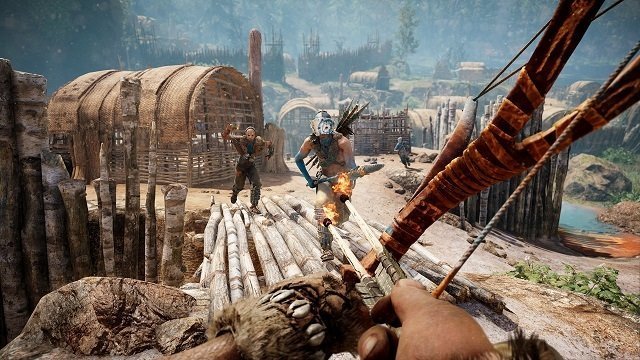 With the Wenja tribe starting scattered across the continent after their village was devastated by UII the powerful leader of the Udam tribe players have their work cut out for them as they bring Wenja together. Helping you are powerful Wenja clan members that bring their own expertise to your adventure which are key as the Udam will stop at nothing to exterminate the Wenja believing that cannibalising them is the only way to sanctuary from a terrible genetic disease that is weakening their own tribe.

Mechanically Far Cry Primal is similar to the other titles in the franchise with open world environments, first person perspective and a mix of melee and ranged weapons that are appropriate for the time period (clubs, axes, bows and slings). All of these weapons are required to be crafted from materials that are scavenged from the environment and can also be acquired by completing quests for NPCs.

With crafting being essentially the only source for weapons it’s designed to appropriately scale throughout your adventure to enhance lethality in a rewarding fashion. Keeping your weapons upgraded will see you appropriately matched against the game’s natural predators and the hostile tribes you encounter as part of the story. 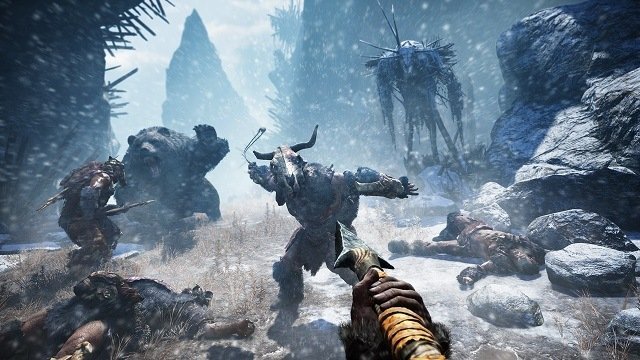 To ensure the Wenja can expand unmatched across Europe you’ll need to attack and dominate camps of your enemies allowing the Wenja to move in and begin patrolling the area, providing you resources and additional side quests in the process.

Taking the Far Cry formula which has proved very popular in the gaming community and shifting it back in time has created a fantastic new experience that few other games have explored historically. While this does mean that things like weapon variety and story are more minimal than the action fueled other Far Cry titles Primal is still overall worthy of the Far Cry name.

Games Finder is a Steam Curator and featured in the aggregate review scores data of MobyGames and Neoseeker.
FEATURED ON
Games Like Ark: Survival Evolved, Games Like Horizon Zero Dawn, Games Like Tomb Raider
LEAVE A REPLY Cancel Reply