Farm Heroes Saga takes the best of Candy Crush Saga and changes the theme while introducing a handful of new mechanics to deliver a fun and colourful matching experience that expands the King universe of puzzle mobile games. With a farm theme and the cute little animals that go with it Farm Heroes Saga is intended for those that can’t get enough of the casual match three genre from the developer but need another game in their arsenal to play in between life regeneration. 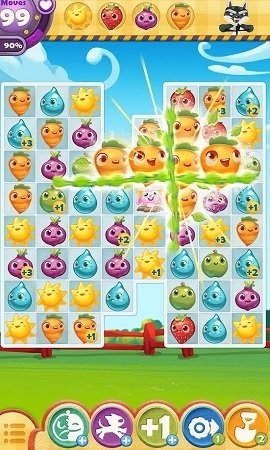 Themed around Rancid Racoon who is spoiling the precious virtual farm lands and in turn stealing the Cropsies which replace gems from other match three titles as your matching tiles. Developed by King Farm Heroes Saga packs a similar number of levels as the original Candy Crush Saga with several hundred varied challenges that revolve around matching and collecting Cropsies from the game board.

The core gameplay of Farm Heroes Saga sees players matching these farm themed tiles of carrots, beetroots, sun, water, apple and strawberries in typical match three fashion to clear them from the game board and achieve the objective of the level which usually revolves around collecting particular tiles. Like others in the genre you’ll find obstacles in the way or limits the number of available moves being the primary difficultly to overcome. Beyond this standard offering Farm Heroes Saga also includes some boss themed levels against Rancid Racoon himself although these are still fundamentally a match three puzzle game. 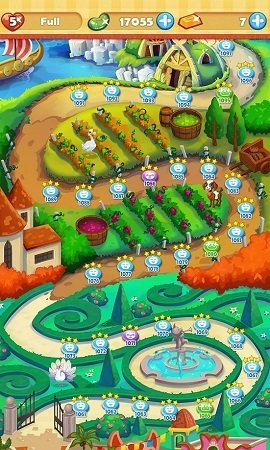 With the majority of Farm Heroes Saga levels being based on collecting particular tiles in limited turns there is an element of forethought required to conquer the hundred odd levels on offer. On top of this diligent players will be able to achieve higher scores to show off to their friends as your unused turns will convert into additional points. With the experience King has in developing such games Farm Heroes Saga ramps up the difficultly at steady pace to ensure chasing 3 stars on levels is not a given.

Just as things start to get difficult this is countered through boosters which can give you an extra few moves, take away an entire row of crops, give you bonus resources or remove a particular tile from the game board. Depending on the booster players will use one of the two currencies available in the game; magic beans which are earned for completing levels and gold bars which must be purchased with cash which ensures that free players aren’t cut off from all possible boosts. If you’ve played games in this genre before then you’ll recognise this sort of setup and quickly step into the experience. 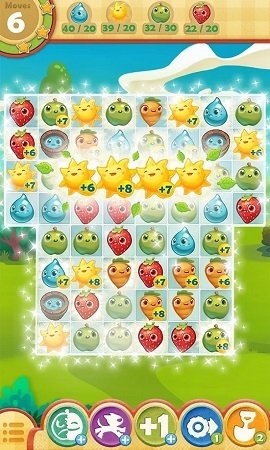 While on the surface it is easy to write Farm Heroes Saga off as a simple re-skin of Candy Crush there is enough variation here to create a new fun match three puzzle experience.