Ideal for long time fans and new faces to the Fire Emblem franchise is Fire Emblem Awakening another addition to the tactical role playing franchise. While it might be the unlucky 13th game in the main franchise this does not effect the game at all as the game achieves new heights, an impressive feat given the level of polish the franchise is known for. 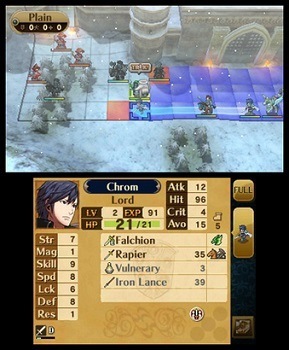 This story will carry players across the continents of Archanea and Valm through a group of soldiers that call the kingdom of Ylisse home. Your role in this group is as an amnesic who can be customised to your liking. Customisation of your character is fairly impressive with options for gender, hair, voice and various other features, this is barely the surface of customisation that Awakening has to offer.

Part of making the game more accessible to newcomers starts right off the bat through the three difficultly levels (a fourth of which is unlocked if you can complete the toughest setting of Lunatic). This setting combines with classic mode (where character permanent death is on) and casual mode were fallen characters return at the end of a battle.

Fire Emblem Awakening gives you a good sense of exploring the game world even though most of the game takes place on set pathways. The way that the game introduces random enemy skirmishes and a decent number of side missions though ensures you get some content outside the story missions and adds extra depth to the whole adventure,

On the actual gameplay front little has changed in the must love franchise with players still moving their various units around the grid based map to engage with enemy units. With up to forty potential characters to recruit and a great range of weapon and armour options the game contains its objective of making everything customisable. 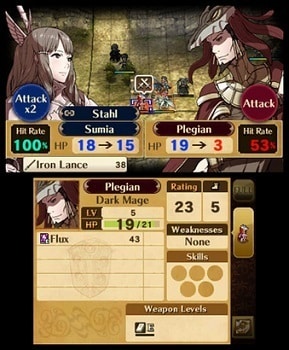 Building relationships between your characters is vital in Awakening though as you’ll get a number of bonuses for a close relationship. Characters of the opposing sex can even eventually marry and have children which can then be recruited. With these relationships being fairly straight forward to build through support conversations its a fun side element to the game that can really turn tough battles in your favour.

Fire Emblem Awakening is the shining star on the 3DS platform and those that don’t own one will wish they did.

Games Finder is a Steam Curator and featured in the aggregate review scores data of MobyGames and Neoseeker.
FEATURED ON
Games Like Advance Wars, Games Like Ni no Kuni, Games Like XCOM
LEAVE A REPLY Cancel Reply