Fish vs Pirates has you helping the fish fight back against the pirates in this very Plants vs Zombies inspired game. The game started on Android devices as a free to play experience but eventually made its way to the iOS app store as a paid product with additional levels and content. 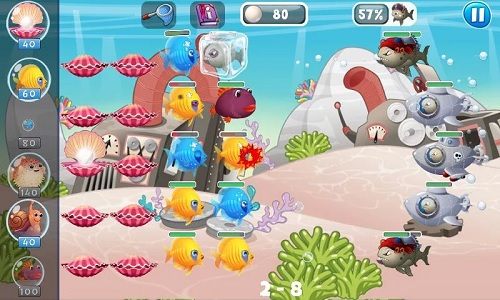 If you’ve played other Plants vs Zombies clones then the game formula used in Fish vs Pirates will be very similar. In order to protect yourself from the seemingly endless waves of pirate fish players will need to generate resources and use a variety of sea life to fight off attacks.

The resource in the game is pearls which are created by oysters continuously once placed within the playing field. Pearls are then spent on placing fishes and other marine life (snails and starfish as an example) which each have their own way of dealing with pirate attacks. Pearls are the backbone of any good offense and should not be underestimated by the player.

Progression is an important aspect of the game which is split into 4 different episodes (10 levels for each) or 5 different levels for the iOS version (again each having 10 levels). As you advance through the episodes new mechanics, fish and enemies are introduced to you which means you’ll have to change up your strategy to keep moving forward in the game.

During early stages of the game you’ll encounter simple Pirate Fish, Helmet Pirate Fish and some faster versions of them which are simple enough to deal with and don’t offer a huge challenge to players. Slowly though the pirates will get more determined in their goal and send out fish like their Sneaky Sniper that instantly pulls itself to your front line by use of a handy hook. 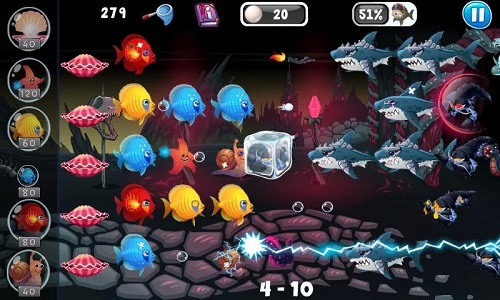 Of course to balance this out your arsenal of fish increases just as fast in power and evolves from simple bubble shooting fish and hard shelled snails to more powerful marine creatures. Things like the Swallow Fish that can swallow an enemy whole or the explosive Puffer Fish help even the odds in your battle.

For Plants vs Zombies fans Fish vs Pirates presents a great opportunity to enjoy similar gameplay if you just can’t get enough of the side scrolling tower defence-esque genre.

Games Finder is a Steam Curator and featured in the aggregate review scores data of MobyGames and Neoseeker.
FEATURED ON
Games Like Plants vs Zombies
LEAVE A REPLY Cancel Reply