Giving you a host of deadly weapons and placing you in front of a football field is FootLOL: Epic Fail League. Unlike other football titles this wacky title won’t have you controlling the players but instead be indirectly influencing the result by using items like mines to literally blow up the field. 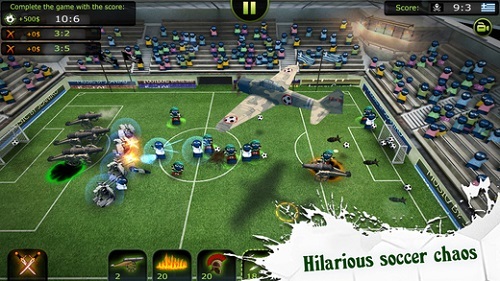 The game gives a whole new meaning to desperate to win with your opponent (both AI and other players) having an equally deadly arsenal of items. Based around tournament like progress between four different planets you’ll master different sorts of fields as you unlock new gadgets, kits and hats for the team. Win conditions also extending beyond simply winning the match there is some variety and the need to change your strategy.

Your first exposure to weapons in FootLOL: Epic Fail League comes with the trusty landmine which is ideal for blowing the goalie into the air to secure an easy goal. 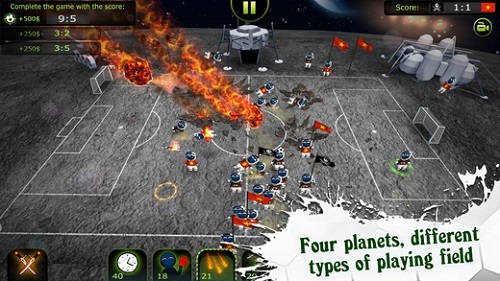 With more wins under your belt you’ll turn your cash into new weapons and even skill trees to help you even further. Every strategy has a counter though with FootLOL adopting the rock-paper-scissors approach often seen i video games.

When all is said and done FootLOL doesn’t really offer too much of a challenge and is more of a casual game that you’ll conquer in an afternoon or two and just take in the explosive action along the way. It feels most at home on mobile devices (under the name Crazy Soccer!) where the basic gameplay works well on touch screen devices.