After finding a New Eden to call home and having it ripped away by the powers of the Titan you’ll awake as the hero in the game world and attempt to make everything right again. Combining a card and hero collecting mechanic with an interesting turn based experience Forge of Gods is a fantastic journey that can be experienced in a range of ways (mobile, browser or downloaded). 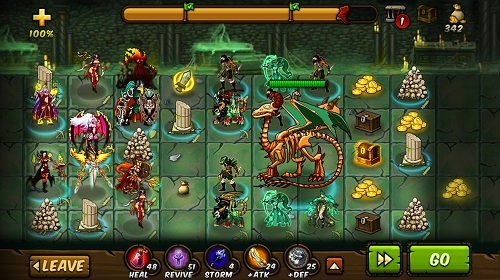 Forge of Gods opens with players being freed from a dungeon by a team of heroes. After you are freed players find themselves awakened from a century old slumber, called upon to rid the world of Titans and lead the world as its hero.

Your hero can take many forms and is referred to within the game as your warlord. Options include Prince Vlad who can drain health from enemies, Graught the Crusher who causes friendly beasts to attack 2 times per turn, Alaniel the Sylvan who can hit enemies in a line and Adar Fireborn who damages foes around his target. While this can be swapped later choosing a warlord for the playstyle you wish to adopt early has its benefits.

The main gameplay cycle of Forge of Gods is one that fans of hero collecting RPGs will be familiar with and revolves around players obtaining heroes from summoning or the battlefield and then evolving them into more power forms to further your story (or PvP) or progress. Players can also fuse to give their current heroes an experience boost or sell them for gold.

While some games in the genre lack any real depth beyond the collection mechanic Forge of Gods holds its own in the strategy department quite well. This is achieved by giving players a total of 15 slots in their army to place attackers and defenders in a strategic way to counter the opposing forces. Players can also form sets to give passive boosts to their squads by mixing the right combination of units.

Uniquely though players control the movement of their army, one square forward at a time allowing you to adapt your formation to the terrain and upcoming enemies at any stage. Players can also mark a single enemy to be the focus of all attacks for the next turn if there is a particularly deadly enemy to deal with. Various rune pickups, souls and gold will also drop and be required to be picked up by characters or in the case of gold clicked on by the player. 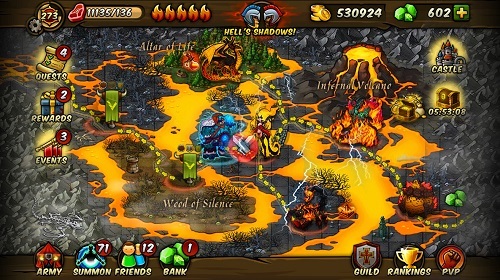 All of this is wrapped in a strong campaign progression system that sees you earning new characters (and elite versions) in game levels and lets you hunt for particular ones as well as they are tied to particular stages.

The level of depth offered by Forge of Gods is surprisingly deep and also highly addicting, with quests, PvP and a good community behind the game there is also plenty of incentive to stay with it in the long term.

Games Finder is a Steam Curator and featured in the aggregate review scores data of MobyGames and Neoseeker.
FEATURED ON
Games Like Heroes Charge, Games Like Idle Heroes, Games Like Summoners War
LEAVE A REPLY Cancel Reply