Fossil Fighters is a game that has you digging up the past and battling dinosaurs against each other in strategic turn based combat. The game draws obvious inspiration from the popular Pokemon series while adding new archaeologist mechanics to the monster capture and battle formula. Fossil Fighters  is available for the Nintendo DS with the success of the franchise leading to the release of several sequels on the Nintendo DS and 3DS platforms.

Fossil Fighters begins with a healthy tutorial to introduce players to the Fossil Fighters formula that focuses on extracting dinosaur bones carefully from the ground and protecting them in order to revive a powerful monster. While based on the dinosaurs of the real world Fossil Fighters refers to these magnificent creatures as vinosaurs. With the tutorial complete the world of finding, training and battling vinosaurs is split wide open to players. 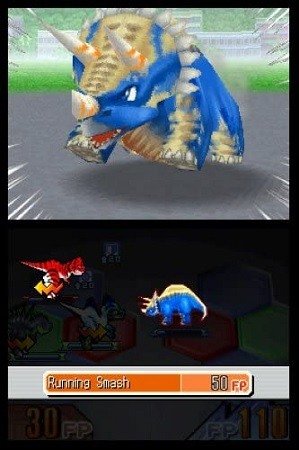 Supporting this adventure is the frameworks of a story that place you as a young child that travels around the resort island of Vivosaur Island. Home to countless vivosaur fossils players can finally live their dream of digging up fossils and battling their revived vivosaurs against others on the island and ultimately claiming the title of Fossil Fighters master.

In total there are over 100 vivosaurs to locate and battle with the two mechanics offering two contrasting mechanics albeit both rely on forethought and careful strategy. On the fossil excavation side careful use of your tools and patience will ensure you preserve the fossils which turns into equivalent strength vivosaurs for battle. These tools include both the extraction from the ground but also careful handling and cleaning after extraction to prevent damage that would flow through to vivosaur strength. For added pressure Fossil Fighters introduces a time limit to this process though so balancing speed and precision is vital. 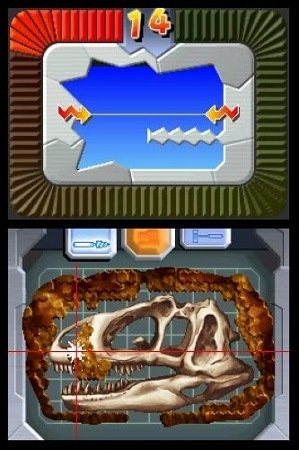 On the combat front players will find battles similar to other monster battle titles with turn based mechanics with elements playing a central role to who has the advantage. Elements in Fossil Fighters (in order of advantage) are water, fire, earth, air and neutral with a separate element for legendary vivosaur. Alongside careful application of element each vivosaur has their own skill sets that unlock based on the number of fossil parts that have been unlocked for the vivosaur. In total you’ll have been 4 or 5 skills which can include powerful team skills that take more power to use but leverage your other vivosaurs for additional attack.

The Fossil Fighters skill system goes further than most with the genre though with particular attacks having different damage spread, limits on attacks against flying foes and attacks that change the stance of your vivosaur potentially leaving them extra susceptible to a counter attack. 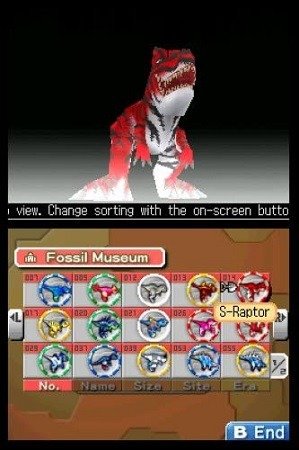 When all these mechanics come together you’ll find Fossil Fighters combat offers plenty of depth where careful planning can actually overcome raw power. Combining this with the unique non combat mechanics (fossil digging) it stands out within the genre.

This review was first published on February 17, 2014. Read our update policy to learn more.