Frozen Free Fall is an iOS and Android casual matching puzzle game developed by Disney which puts an icy twist on the popular genre while incorporating all the stars of the popular Disney film, Frozen. Originally launched as a promotional piece alongside the film Frozen has surpassed many expectations achieving 50 million downloads on Google Play alone and receiving regular updates along the way. 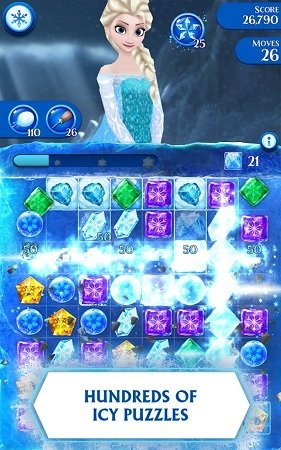 In terms of gameplay Frozen Free Fall is set in the same world as the Frozen film (the Kingdom of Arendelle) and has players joining characters from the film on an icy puzzle adventure. Players start their adventure as a young Anna and Elsa but as they advance through the game will unlock the ability to use more characters including adult versions of Anna and Elsa. Every two dozen odd levels players will unlock a new character to ensure you have a steady flow of new options to play as although this dries up just past the level 100 mark.

Characters come with their own special power up which can help you clear the large number of levels that Frozen Free Fall has to offer and selecting the right one for the job gives the impression of extra strategy over the usual match three gameplay. Taking these character abilities into consideration is particularly important during the later levels where mechanics require specific abilities to be appropriately countered. 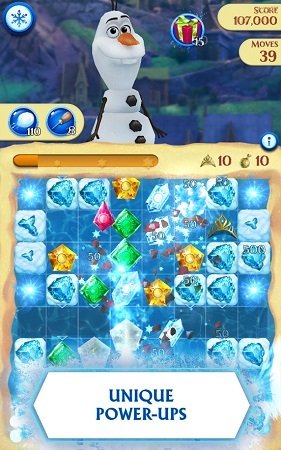 Abilities include Elsa’s ability to wipe a single colour of crystals from the game completely, Hans who can pull out his sword to slash some crystals that are in your way, Sven’s carrot that destroys 9 random tiles and many others with Pabbie, Kristoff and Olaf also making an appearance in Frozen Free Fall.

Outside of these character abilities Frozen Free Fall is a fairly standard match three puzzle game although it does feature both vertical and horizontal play which does help accessibility for children players in particular. Featuring 6 different crystal colours players are rewarded with additional charm power ups for making four, five and T shaped matches which have appropriate ice themed names like Windchill, Glacier and Iceberg. 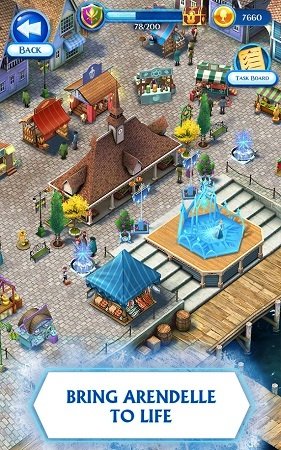 Utilising these alongside the character power-ups will allow players to progress through the 1,000+ levels which feature a range of different challenges from score targets, removing snow in a certain number of moves, time limits levels, special item collection or eliminating a specified number of a coloured crystal. Of course as standard for the genre game boards can come in a number of different shapes and sizes with some featuring obstructions which will hinder your matching skills. Each level the player has a limited number of moves to achieve the given goal for that level which can be clearing certain blocks, reaching a certain score and more.

To add some additional context and motivation Frozen Free Fall allows your level progress to a contribute to rebuilding your very own Arendelle to using your coins from level completion to decorate and customise the popular film location with objects, buildings and shops.