Fruit Splash Mania is another puzzle experience coming from TeamLava and is offered to players with either an iOS or Android device with a keen interest in the puzzle matching genre. Adopting the simple gameplay that the genre is known for Fruit Splash Mania attempts to separate itself with high quality visuals, level diversity and challenges for players to overcome resulting in an experience that is reminiscent in design to wooga’s popular Jelly Splash game. 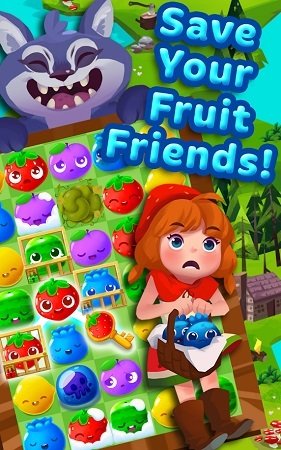 Fruit Splash Mania is split into over one hundred levels with players awarded stars based on their efforts in each level in a similar manner to other games in the genre. As players complete levels they’ll have to achieve harder goals which can range from reaching certain scores to freeing their fruity friends from a number of obstacles and these objectives are constantly in flux to ensure you don’t feel like you are playing the same level mechanic for days on end. While claiming to feature hundreds of levels with different numbers for the iOS and Android version the lack of updates and support for the game following its release has left the game unfortunately with a number of potential game breaking bug that locks users on level 48.

In addition to the diverse level objectives each level also has different numbers of tiles or layout to further add to the sense of variety on offer in Fruit Splash Mania. The scenery also evolves as you complete more levels changing from village environments to farms, jungles and more providing a visual sense of progression that matches the mechanical progression. 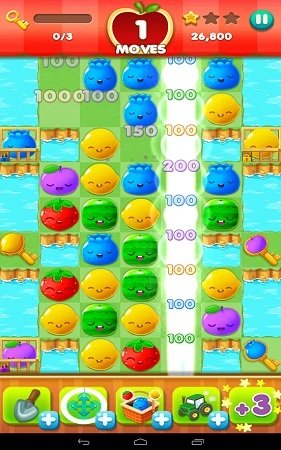 In addition to the core levels though Fruit Splash Mania works in a number of higher tier challenges which can reward keys for those able to complete them and claim a powerful reward for your trouble when 5 are collected. Fruit Splash Mania has been slightly sneaky in this regard by creating challenges that tie into their other game products in the hopes you’ll also download them. While likely a good idea to the marketing team the overall approach does come off as slightly tacky and unnecessary.

In terms of core gameplay Fruit Splash Mania doesn’t deviate far from establish genre norms requiring players to connect similar fruits together using lines to connect adjacent squares (uniquely though diagonal lines are allowed). Once a connection is made they will be removed from the game board with points being awarded accordingly. Longer strings of matches will leave behind special fruits which can clear entire rows of fruit and are often vital for some of the harder levels where careful planning in the randomised chaos of levels will pay off. 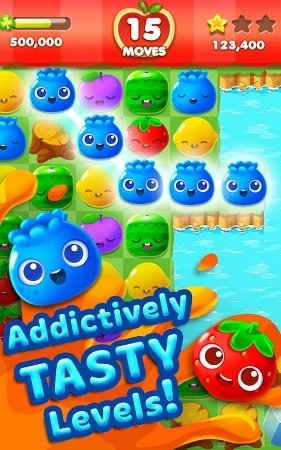 Power ups are also eventually introduced to the player when they reach a certain level which can help them earn three stars on every level which is great for those achievement hunters out there but for the average player is likely to be a frustrating or expensive exercise as some levels are tuned finely to require these power-ups. Of course no freemium puzzle game is complete without a life system and Fruit Splash Mania doesn’t skip integrating this with an hour long wait between lives.

While definitely on the higher end in comparison to other offerings Fruit Splash Mania only removes lives on losing a level so it generally doesn’t harm longer play sessions.

Games Finder is a Steam Curator and featured in the aggregate review scores data of MobyGames and Neoseeker.
FEATURED ON
Games Like Candy Crush Saga
1 COMMENTS
LEAVE A REPLY Cancel Reply