Game Corp DX delivers an enhanced version of the popular free to play game (Game Corp) with a large feature list there is plenty of room to manage your own gaming company without being bogged down by complex mechanics. 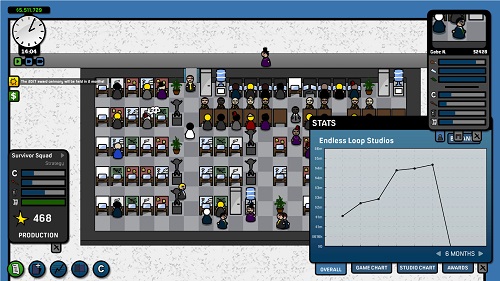 In your Game Corp DX adventure your job is to take your simple game company from developing unsuccessful micro games to massive large scale games that receive plenty of critics praise and dollars. In order to do this you’ll have to fight off rivals, train your team, expand and win the yearly game awards.

Gameplay in Game Corp DX is kept simple with players set up in their own small office building. In order to make games players will need to fill this with fridges, water cools, tables and work spaces for employees. This will ensure your workers are well fed while providing them with the space they need to complete their work.

Workers can be classified into one of four specialities; code, art, sound or writing with games of different genres requiring different inputs of each before release. While workers will gain individual skill as they work on games once assigned a speciality they can be trained in more advanced tools related to their discipline for higher quality games.

When starting a new project players will get to select micro, small, medium, large which require different numbers of team members. Once you’ve settled on the scale its time to assign workers and let them get to work. 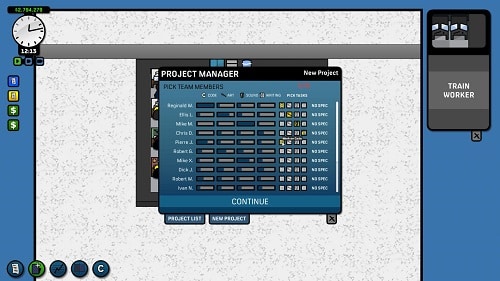 Depending on the amount of work involve players will find the game ready for publish a few game days later at which point you can release it the world with an appropriate advertising spend to help it generate more revenue over its life time.

Using these funds to reinvest in your business you’ll be able to expand your operations with larger office space, new staff and more. All of which support one of the main game objectives of claiming all the game awards at the yearly award show and becoming the top game company.

This review was first published on April 27, 2014. Read our update policy to learn more.

Games Finder is a Steam Curator and featured in the aggregate review scores data of MobyGames and Neoseeker.
FEATURED ON
Games Like Adventure Capitalist, Games Like Game Dev Tycoon, Games Like Prison Architect
LEAVE A REPLY Cancel Reply