Dream big as you create your own game development company in this business simulation game appropriately titled Game Dev Tycoon. Launched back in 2012 this tycoon game allows you to develop the games, hire your staff and conquer the gaming world in the process and has become one of the highest rated titles in the genre.

Game Dev Tycoon is known for more than just it’s gameplay though and equally known for its unique attempt to counter piracy by releasing a cracked version of the game which regardless of players actions they will find themselves eventually bankrupt due to pirates not spending money on their new release games in ironic fashion. 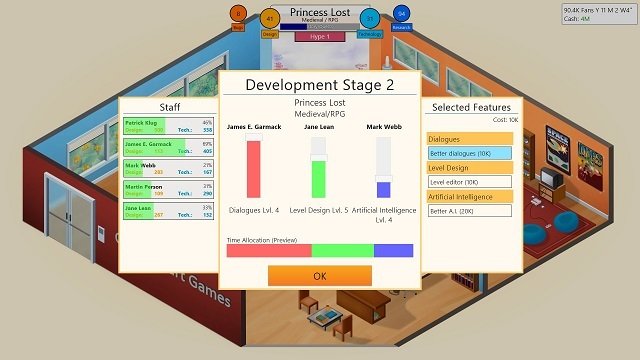 Unique piracy fighting techniques aside the game starts players in the 1980s with arcade games sweeping the planet as the hit new thing to do for entertainment in your free time. Starting in your own garage without employees or much cash your objective is to jump on this latest trend to propel your very own video game development company from the arcade and beyond.

Once outside the arcade era other game consoles will be introduced that mimic real game consoles allowing the breadth of games developed to expand rapidly in line with the worlds own game development timeline. With each new game that players opt to create you’ll be able to alter the variables that you think will help you deliver a fantastic game. This starts with the topic ranging from wild west, zombies, romance, space, superheroes, pirate, fashion, horror and dozens more along with your intended audience from young, everyone or mature. 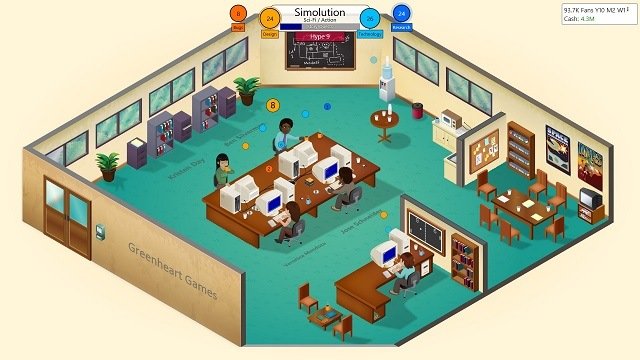 An additional overlay of genre is important here with action, adventure, RPG, simulation, strategy and casual coming together for your perfect game. Games cannot be in development forever though so you’ll have to carefully allocate your time and budget across three stages of game design. In Stage 1 you’ll have engine, gameplay and story/quests while Stage 2 is all about the dialogue, level design and AI. Finally is the polishing elements of world design, graphics and sound that bring all your choices together.

After release players will be earn experience that improves their talents in design, technology and research while also receiving reviews from critics with a steady cash inflow. If players find themselves short of cash they can also take up temporary contract work and provides a viable short term side hustle to your main objective. 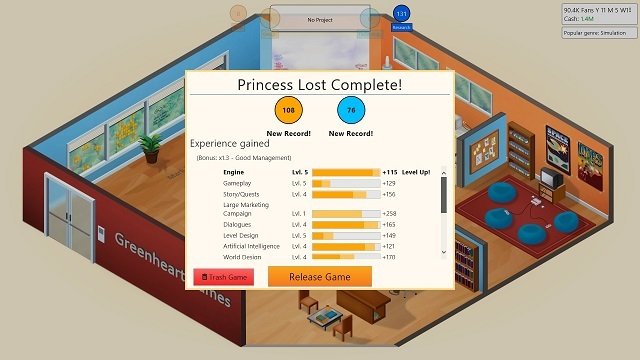 As the decades of gaming technology pass bt players will be able to hire new staff with unique abilities, expand into office space, buy game licenses and even get into the hardware space with physical products. This allows increasingly complex games that provide greater return but can also bring down your gaming empire with one false step just like the real world of game development.

If you’ve ever thought that you wanted to be on the other side of the fence in the realm of gaming Game Dev Tycoon offers a simple way to achieve it and has a wealth of options to play with. While these can be cheated with the proper external guides that provide the most profitable combinations you’ll only be cheating yourself out of creating your perfect game and the discovery process.

Games Finder is a Steam Curator and featured in the aggregate review scores data of MobyGames and Neoseeker.
FEATURED ON
Games Like Prison Architect, Games Like Roller Coaster Tycoon, Games Like Theme Hospital, Games Like Transport Tycoon
LEAVE A REPLY Cancel Reply