Game of Emperors offers medieval themed real time strategy (RTS) browser gameplay with colourful graphics where you’ll advance your empire through constant development. Following the standard formula of creating your own empire through resource collection, raiding and research of technologies there is plenty to do on your way from tutorial to top of the leader board rankings against the tens of thousands of other active players in the community. 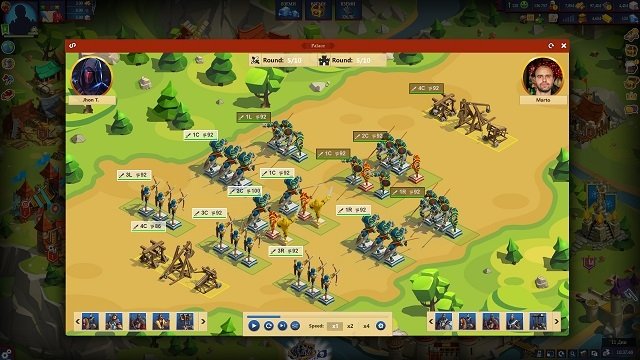 This tutorial opening in Game of Emperors is an expansive one with over two dozen steps and ensures you are adequately armed with the knowledge you’ll need going forward for your empire. A side benefit of this extended introduction to the game is you’ll have a large base of core buildings and resources right from the onset, allowing you to experience the more enjoyable components of the MMORTS genre right away rather than after a few hours like in similar games.

Game of Emperors is not shy when it comes to offering broader features either and packs in nearly everything you’ve seen before from MMORTS games in the genre into a single free to play experience. You’ve got the likes dozens of economic and military buildings, population assignment, tax rates, population happiness, detailed player profiles, PvE dungeons and cities to raid, emperors with skills for your army and more. Be it the economic focused lumber mill, iron mine, stone quarry, farms, marketplace or university each building has a crisp and colourful design that looks great on the equally colourful backdrop. This design philosophy also extends to the general menu and information screens that are simple but ensure you can clearly see the necessary information to make key decisions for your empire. 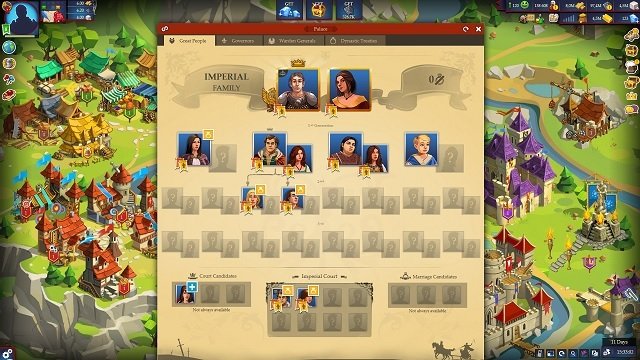 While none of the above are particular new in the genre Game of Emperors would have to be one of the first to use such a large number of these mechanics them in a single game and utilise them to maximum potential. Gameplay still comes down to what you’ve likely experience before with the assignment of villagers to your resource generating buildings you’ll gather lumber, iron, stone and gold to fuel your war machine and grow the population of your empire.

Alongside your resource population the military receives plenty of attention in both offence and defence with units ranging from the archer, infantry, cavalry, spies and siege. On defences you’ll find a range of walls, fortresses, moats and towers that can be upgraded alongside your units. 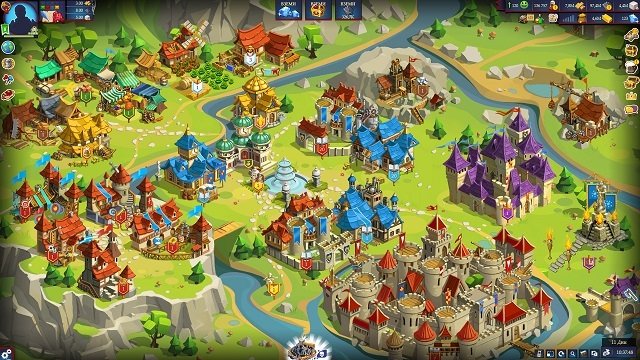 You’ll have to put some real thought into expansion of your empire in Game of Emperors as you’ll want to keep a highly employed workforce in order to earn the most tax revenue that gives you the gold resource which is a vital resource in all empire endeavours. Another area that requires significant planning is the palace where you’ll manage the heirs in the imperial family who each have specific talents to provide small boosts to efficiency across the empire. Each of these characters level up both as governors and war generals which allows for a variety of skills to be unlocked that assist players in the respective economic and military game areas.