Moving the tower defence game genre into the garden patches Garden Rescue is a multi platform title. As the name suggests Garden Rescue has you defending your very own backyard garden from a range of pests that want to eat your precious strawberry patch. Standing in the way of these beetles, ants and other forms of pests are your array of other plants that bring their own powerful attacks and utility to the garden paths. 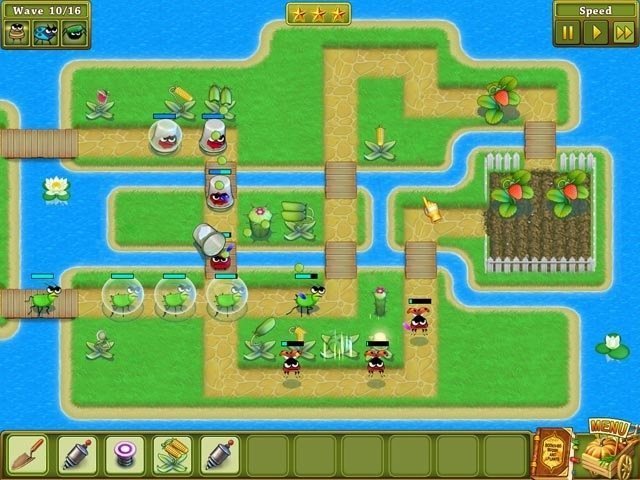 With a range of plants at your disposal its time to defend your garden from an equally diverse range of garden insects. The Garden Rescue squad comes in to save the day by leading a team of green defenders to prevent the insects from gaining entry to the garden.

Gameplay in Garden Rescue is what you would expect from the genre with a variety of insects (ants, bugs, beetles, bees) following a set path in order to reach your tasty garden full of strawberries. Along this path the player can build a variety of plant based defences to deal with the threat such as the pea and corn plant that fire their tasty vegetables at insects and specialise in ground and air units respectively. This is in contrast to the sundew plant that acts as the freezing tower by slowing advances, the hot pepper that provides an area of effect ground scorch attack and the devastating pumpkin which while slow firing offers a massive burst of damage. 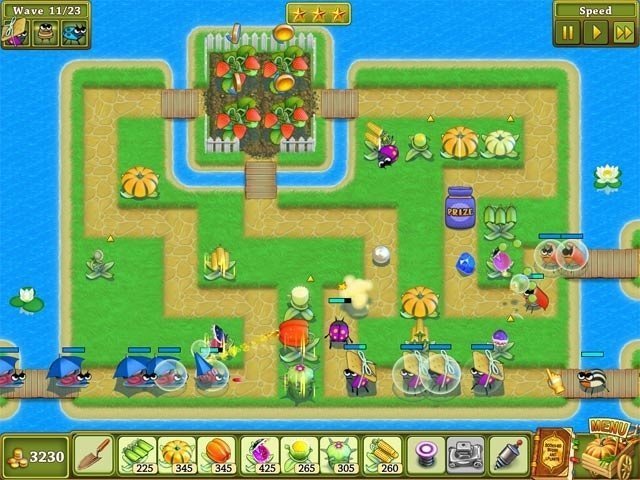 Each of these plants cost gold coins which are slowly generated by your strawberry patch with clear indicators of when the next coins will be generated and on the later difficultly levels careful consideration of plant mixes and placement are required to overcome levels with your limited income of funds. Upgrades for each plant are available to further boost damage and vital on levels where space to build is limited. Occasionally defeated enemies will also drop one time use items like the spring or lawnmower which can quickly rid enemies from the game map entirely and best saved as a last resort.

While early levels are very easy affairs and can be won without much thought the later levels in Garden Rescue are a real challenge. The rate that you gain new plants and the rate that new enemies are introduced is very well paced in Garden Rescue so that just as you master a strategy you’ll have to change your approach completely. The game also adds plenty of obstructions and multiple entry points as you advance to keep you on your toes. 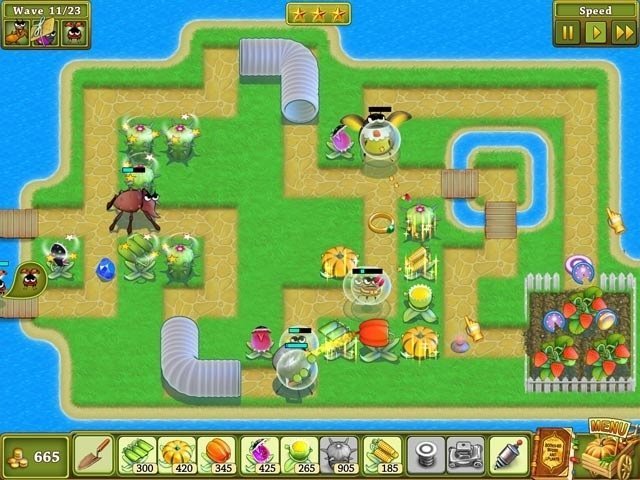 Best of all is the multiple (3) difficulty levels available in Garden Rescue which means it’s accessible to fans of the genre with all skill levels and is also a great way for newcomers to hone their tower defence skills by working their way through the difficulty levels.

This review was first published on September 20, 2014. Read our update policy to learn more.