Mixing renovation with the match three genre Gardenscapes introduces you to a world where you’ve recently inherited a mansion with your own butler named Austin. While the mansion is a superb piece of building and design the garden could use some resurgence, a task that Austin passes on to you as the new owner but is happy to guide you through the process. If you love adding a bit of design and objectives to your puzzle title Gardenscapes offers a solution which is available to play online (through Facebook) or on your Android or iOS compatible phone. 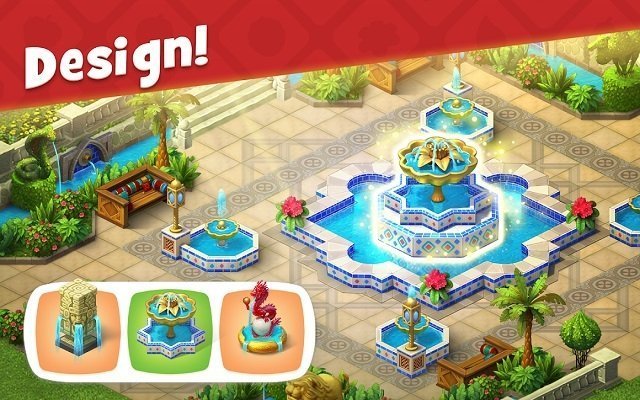 Unlike other match three puzzle games that have you complete hundreds of levels with little context or progress other than a level number Gardenscapes gives you a real sense of accomplishment as you transform the run down location into a beautiful thriving garden through gameplay. If you love a bit of creative or gardening flair in your life Gardenscapes is particularly attractive as you create a tangible and personally selected mansion from ruin.

Austin will give you various tasks from putting in new benches, sweeping up the garden, rebuilding the fountain centrepiece and more. With each of these tasks players are generally given several options of styles which lets your final mansion be different to that of other players by virtue of the decisions you make through the match three puzzle campaign.

With the sprawling land of the mansion players have several different areas with their own unique elements to repair this effectively splits Gardenscapes into a number of chapters as you progress around the mansion. Actioning these tasks is based on in game stars which players gain one at a time for completing match three puzzle levels. 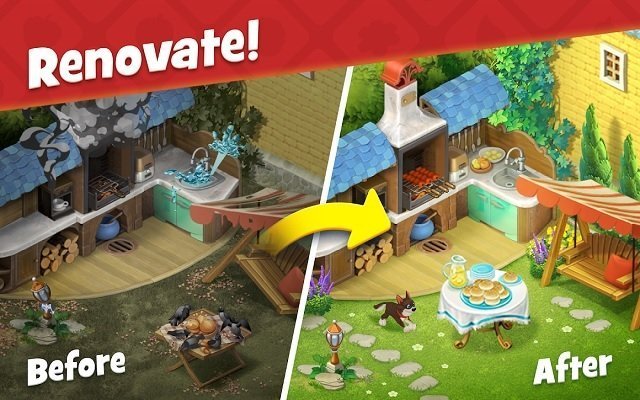 Basic tasks mostly only take a single star but some of the larger items require a few levels between your next garden improvement. Occasionally competing tasks will be offered giving you some flexibility in what you build (or repair) first to give you that greater sense of it being your mansion. This choice or at least the impression of choice puts Gardenscapes well ahead of similar games in this genre.

If the Gardenscapes brand sounds familiar to you then it is likely because this isn’t the first Gardenscapes experience either with previous games focused on hidden items but the developers have done well to push the game into match three genre instead and overall is better suited to the mobile (and browser) and landscape. Driven likely because of the popularity of games such as Candy Crush in this space the developer has done well to preserve the Gardenscapes theme while injecting a solid matching puzzle mechanic into it’s centre.

Mechanically this version of Gardenscapes has the same features of similar puzzle titles with players matching 3 fruits or flowers to create a match with larger matches of 4 and 5 giving you utility to clear the entire board quickly such as the deadly firecracker that shoots up and destroys an entire column or the explosive bomb to take out surrounding tiles. The majority of level objectives focus around the collection of particular items within the game board under limited turns with some variation. 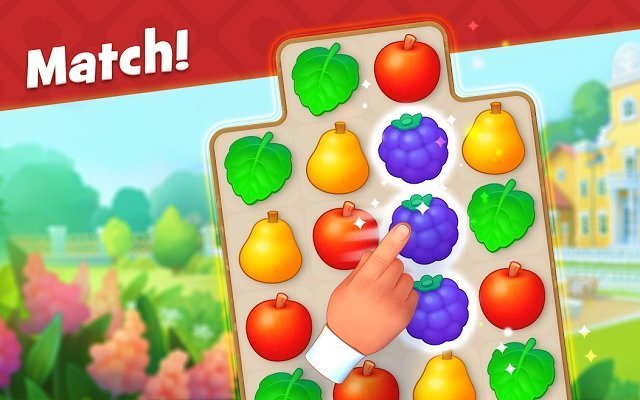 Other once off boosters are in existence and can also assist players although intermediate puzzle gamers won’t be terribly pushed by what Gardenscapes throws at them. One time use shovels to destroy a block or gain a few extra moves are available for coins which don’t require a purchase and are slowly generated as you beat levels. A separate game currency of hearts is used to limit the number of games you can play in a row with one deducted for each level lost which ensures that significant progress is easy to make in most play sessions. It’s definitely quite easy for the patience gamer to never have to drop a dime on playing Gardenscapes and experiencing it to the full depth it offers.

The focus on the transition from run down garden to beautiful landscape is a wonderful change of pace compared to the usual offering of games in this space that are solely focused on just climbing level numbers. If you want to see something tangible on your phone (or browser) as you progress through each puzzle level then Gardenscapes delivers that experience with no green thumb required.