Dominate your opponents with speed and brutal car based weapons in Gas Guzzlers Extreme a 2013 released title in the combat racing sub-genre. Designed for those that enjoy a racing experience but wanted an added layer of action Gas Guzzlers Extreme packs in 7 total race types alongside a healthy number of 18 different vehicles providing ample choice and customisation to design your ultimate death ride. 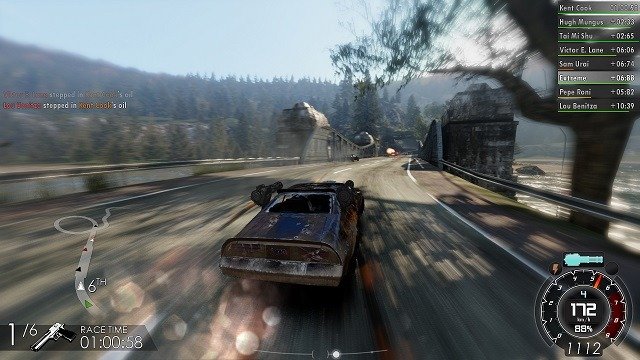 Like any good racing game Gas Guzzlers Extreme locks the best cars and weapons away from the player at the start of the game, requiring players to work towards unlocking them through hard earned race victories, vehicle destruction and bonus sub objectives requiring various conditions to be fulfilled. Your hard earned cash for completing the above can also be used for visual customisation of ones vehicle and is the primary gameplay loop that Gas Guzzlers Extreme will have you engaging with from start to finish. Using the aforementioned 18 different core vehicles as your base you can expect around a dozen upgrades and visual enhancements for each to improve your base model.

When the dust settles the single player career in Gas Guzzlers Extreme will take just over 10 hours for players to complete, giving players that satisfying car development experience as you go from basic driver to deadly fast car with deadly explosive weapons. Just sneaking into double digits in the core experience does mean that further content will either need to come from replay options using the variety of tracks (40) and the 7 race types or in the multiplayer variant although the age of the game does mean that this is mostly a car wasteland. 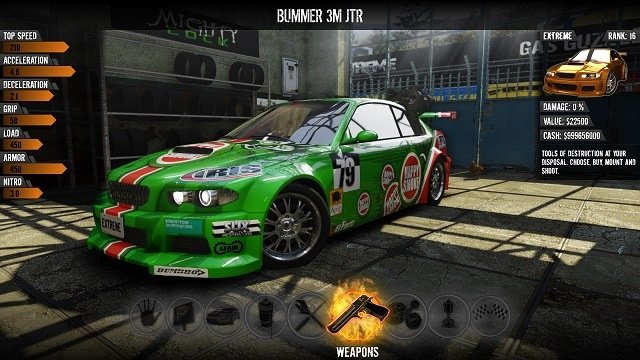 Game modes on offer include classic race, knockout, capture the flag, death match, last man standing and power race that all shift the balance of racing vs combat in various ways while changing the core objective in basic or advanced ways. Each of these modes feels different enough although you’re unlikely to enjoy them all given players will have their own preferred balances of racing and combat that makes several modes stand out.

The tracks themselves are also varied and often feature a number of wide road areas to assist players in chasing down an opponent or dodging enemy weapon fire. Maps are also littered with power ups to turn the race in your favour or repair your car which is vital as destroyed cars are removed from the battlefield and do not respawn although on the flip side provides an easy approach to victory. 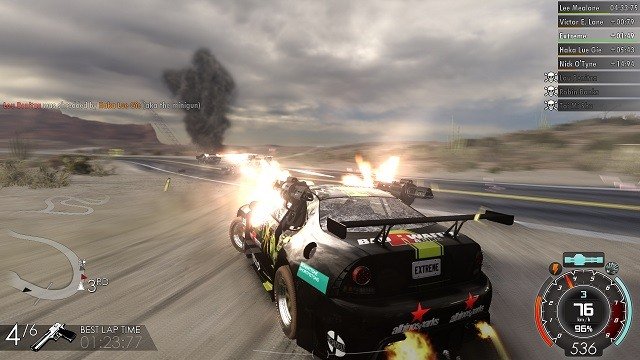 As a racing game Gas Guzzlers Extreme is a decent option albeit short option in terms of core gameplay and accordingly one best played for the combat elements that it adds onto the core driving elements.