Shaking up the base building mobile genre with a game that lacks build times, unique reward mechanics and offers full control while in combat. Available across iOS and Android for free Gods of Olympus lets you command the Gods right from your mobile device while experiencing a fairer approach to the freemium genre. 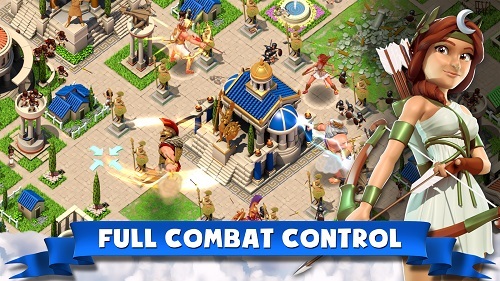 A base building game without timers for buildings sounds almost like a myth but this is exactly the main selling point of Gods of Olympus, no longer will you have to wait hours upon hours for that new fancy building. The unique mechanics of the title don’t stop there though with players also being rewarded for defending attacks against enemies rather than the usual focus on aggressive actions. With this feature players can invest more of their resources into a powerful base to recover that cost through successful defends.

These defences will be made against the gods themselves as they are called into battle by other players (or yourself when attacking), the likes of Zeus, Apollo and Ares are all yours to directly control. All the gods have their own attacks, stats and playstyles which can overcome various defences in both PvE and PvP settings where the objective is to destroy the temples of your opponent. You’ve also got three difficulty options to select from here to help you feel the progression of your gods as they grow stronger. 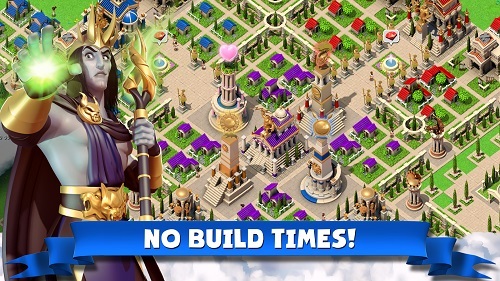 All of this attacking and defending is not without reward though and translated into resources for players to invest defensively in towers and upgrades to building health. These actions are limited by your pool of nectar which is in short supply but does come back upon level up, ensuring new players can quickly find their footing in the game soon after installing it for the first time.