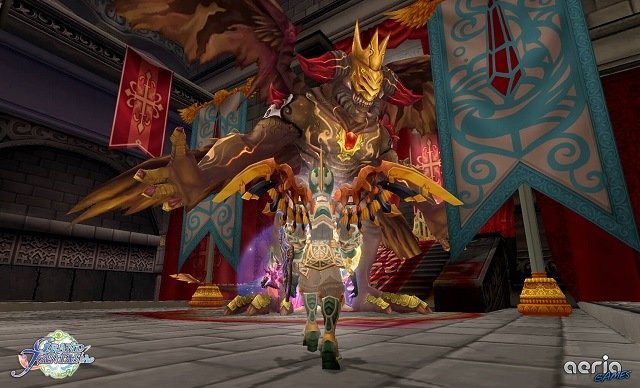 Jumping into the world of Grand Fantasia players will be given plenty of opportunity to customise their visual appearance which utilises a colourful anime like art style. Well ahead of most other MMOs of the 2009 era Grand Fantasia lets you place yourself into your game avatar with gender, face, hair, eyes, colours and a sprite companion available for customisation. Grand Fantasia also offers you the ability to preview one of the future classes so you can see how you’ll look in the late game once you acquire the necessary advancements and class specific equipment pieces.

With your character created you’ll be sent to the continent of Saphael on the tutorial Siwa island where you’ll have the usual array of beginner quests to guide you through the control scheme, combat and general interface navigation. Once complete you’ll be able to move to one of the three core capital cities that tie into your planned character class to start your broader quest. These options include the central city of Kaslow where the royal family roles, Ilya to the east where magical experimentation takes place and Jale that favours mechanical devices. Players will get to visit all of these in time regardless of initial choice although this choice impacts which city you’ll be acquiring your initial reputation with and eventually a mount. 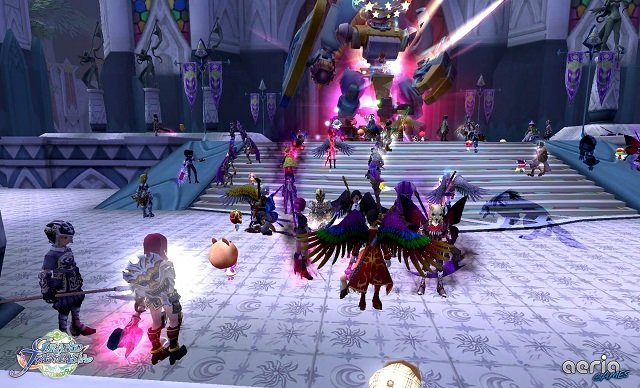 In traditional MMO style after your first few levels as a generic beginner class known as the novice players will be able to select the path that they want to take. For Grand Fantasia this decision is made at level 5 from one of six classes that are upgraded at level 15 and later branch into two distinct paths at level 30 with fixed class pathways for subsequent level 65 and 85 advancements to take you to end game. The generic MMO options are all there in Grand Fantasia with a fighter, hunter and spellcaster alongside the more unique acolyte, mechanic and wanderer.

In typical MMO design each come with their own passive and active skill sets, equipment options and advantages. The spellcaster class pathway for example utilises staves and light weight focused armour that results in them having high magic attack and defence at the cost of comparable low physical defence and attack. 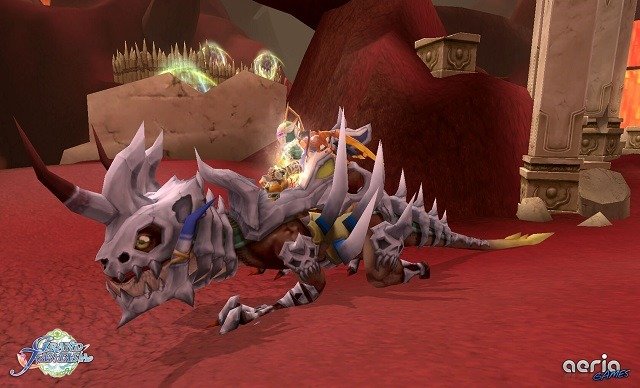 As you advance further you’ll find additional mechanics develop in Grand Fantasia that give you an increasing number of options and mostly notably through the use their Sprite follower.  This Sprite serves as the pet system in Grand Fantasia and will accompany you on your journey and provide a variety of helpful bonuses while adding another layer of customisation to the entire experience. With their own four stages of evolutions you’ll also be able to gear Sprites as you see fit and use them to access the range of crafting and gathering skills that the offer. Be it mining, foraging, hunting or crafting specific armour and weapon types the Sprite is an important aspect of your overall account progression.

This review was first published on June 25, 2013. Read our update policy to learn more.

Games Finder is a Steam Curator and featured in the aggregate review scores data of MobyGames and Neoseeker.
FEATURED ON
Games Like Aura Kingdom, Games Like Crystal Saga, Games Like Eden Eternal, Games Like Flyff, Games Like Ragnarok Online
LEAVE A REPLY Cancel Reply