Set in the world of Sin City Grand Gangsters 3D promises a city of freedom as you get behind the wheels of cars, shoot down AI characters and complete a number of missions across the city landscape. 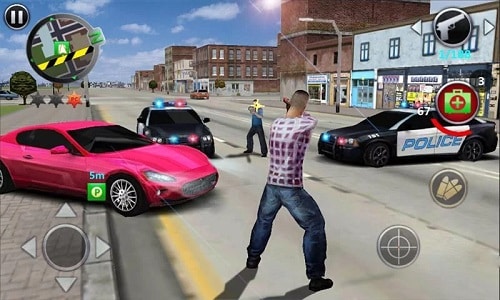 Grand Gangsters 3D builds its gameplay around missions which are access from various points across the map. With the slow game running speed players are best served by hoping in a nearby car. Despite the mediocre run speed other controls within Grand Gangsters 3D are one of the best features that the game offers, with easy movement both in and outside of cars along with a lock on ability that makes it easy to target NPCs.

With these controls as a foundation players can adventure across the Sin City landscape which is broken down into 4 distinct sections. While fairly minimal in terms of features the world serves its purpose, with a decent number of civilians walking around and cars on the streets.

In order to unlock more of the game world you’ll need a certain number of stars from the missions available within the region you’re currently in. These missions are all fairly typical with a mixture of driving and shooting based tasks with star ratings and rewards based on performance. 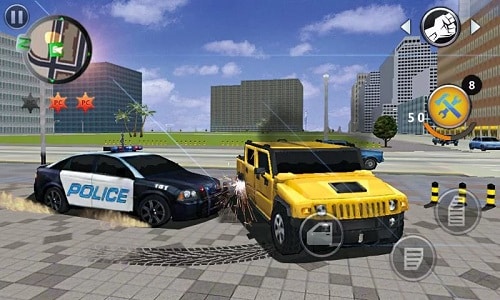 These rewards are new weapons (handguns and machine guns) along with a decent collection of vehicles, all of which can be upgraded which helps you score better and better on the various missions. This also provides that incentive to continue working towards upgrades as you compete against yourself.

Grand Gangsters 3D can provide some fun distraction for a short period of time, especially with the decent controls and items to unlock. The empty game world though and tedious running speed make it nothing more than an average mobile free roam game but a good option none the less for older or low capacity devices.