Featuring a tough turn based tactical game with a science fiction setting is Halfway, Set hundreds of years into the future of humanity our exploration has taken us far into space, with new worlds colonised it was only a matter of time until we encountered something out there. 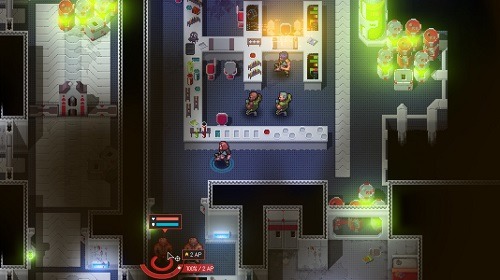 Controlling a small team of survivors after being attacked on their ship of colonists players must fight room by room to regain control of the Goliath and ultimately survive the horrors that infiltrate their ship. All told this atmospheric tactical adventure will take around a dozen hours from start to finish depending on the number of optional missions. Your enemy in this battle is cyborgs of evil who are out of control on the ship.

Utilising 16 bit graphics Halfway is all about simplicity from graphics down to the gameplay which follows an addicting flow of combat, plot, upgrades and move onto the next cyborg filled floor. Along the way additional characters can be rescued to enhance your team although the gear you equip defines them more than anything else given each is limited to only a single ability that can be used every few rounds alongside a passive. 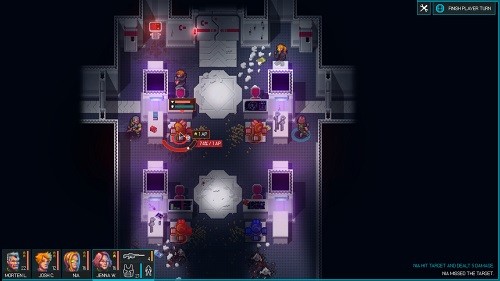 Characters include the likes of Morten who has 10% bonus hit chance with assault rifles and can land a guaranteed hit at any time while Linda can heal herself to full and has increased medkit efficiency. Unfortunately the simplicity is also found within enemy design which is mostly limited to turrets and simple zombie cyborgs with limited AI capacity for strategy.

For an experience of 12hrs or so this is not a make or break situation though but don’t expect to be interested in diving back in for a second time.

Games Finder is a Steam Curator and featured in the aggregate review scores data of MobyGames and Neoseeker.
FEATURED ON
Games Like XCOM
LEAVE A REPLY Cancel Reply