Hammerwatch is a fast paced and simple pixel adventure  where players challenge themselves to adventure from the base of Castle Hammerwatch all the way to the top. Stopping your progress are hundreds of different enemies and four unique game biomes that each hold their own variation of traps, puzzles, secrets and foes to conquer. Released in 2013 for computer gamers Hammerwatch has since expanded to console platforms and an eventual sequel (Heroes of Hammerwatch) that features similar gameplay although additional roguelite gameplay twists. 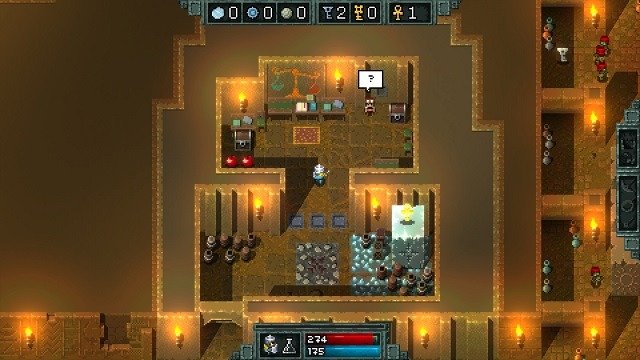 This first edition in the Hammerwatch franchise though is all about the gameplay and keeping players engaged on the combat before them with its story being as minimalistic as possible for a video game. This basic story design sees the opening scene showing players coming across a broken bridge which sends them down a path to the castle with no other path to take on their way home.

Players do have a decent amount of control over the game experience though with three core difficulties that range from easy to medium and hard. This choice will primarily impact health, speed and damage of enemies while reducing the money income you receive for kills of the enemy hordes. In addition to this players can select from a number of available modifiers to alter the experience further and find a few more hours of gameplay challenge. One such modifier includes the ability to set the number of lives your allowed which can really test you on the harder difficulties of the game by creating your own hardcore (one life) runs. 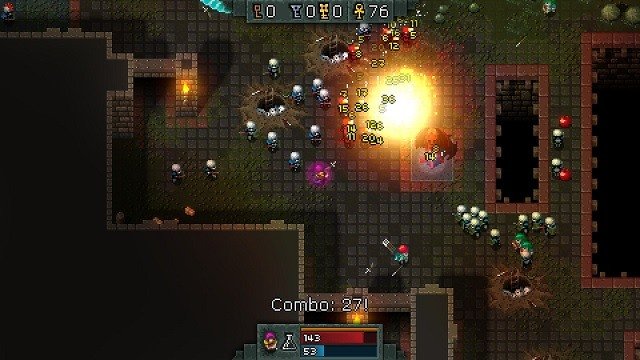 Players of Hammerwatch will also find an impressive number of options for modding tools which allows other players to easily create their own campaigns and maps to share with others which creates potentially endless replay value and fun (especially when paired with the four player multiplayer).

Taking the form of one of 7 different classes in this world you’ll select from the Paladin, Wizard, Ranger, Warlock, Thief, Priest and Sorcerer with each having a distinct approach to gameplay through their skill options. At the core each character comes with their own basic attack and special abilities (active and passive) which spends their secondary mana resource. The Paladin for example is a durable fighter with a quick attack speed who can charge into battles, heal, swing their sword in a wide arc or upgrade it to stun enemies. 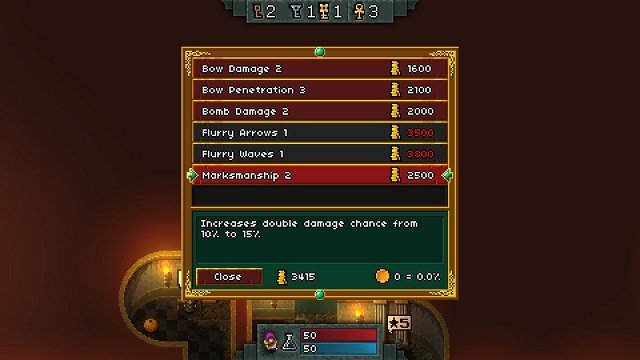 This is of course in stark comparison to the Wizard who trade a lack of defence for a hard hitting level of power from their deep mana pool. With a fireball basic attack that causes explosive damage and a passive frost shield to slow attackers and reduce damage taken you have a hero that commands fire and ice to a high level of mastery. In addition to this base level of depth and variety that each class offers you’ll find that each level up, unlock and upgrade allows you to customise your hero further so that two playthroughs with the same character can feel at least somewhat different.

Puzzles and map secrets are also a plenty in Hammerwatch which helps you keep an eye out in between each wave of enemies that you dispatch and rewards you for doing so with additional resources to ensure your survival or help your growing power level. The odd boss battle also breaks up the core gameplay and they each have interesting (and difficult) enough mechanics that it’s highly likely you’ll fail on your first and even fourth attempt for some.

Games Finder is a Steam Curator and featured in the aggregate review scores data of MobyGames and Neoseeker.
FEATURED ON
Games Like Diablo, Games Like Kings Road, Games Like Realm of the Mad God (RotMG), Games Like Risk of Rain, Games Like The Binding of Isaac, Games Like Zenonia
LEAVE A REPLY Cancel Reply