Harvest Moon 3D: A New Beginning is the second game in the franchise of farming and life simulation roleplaying titles to land for the Nintendo 3DS. Opting to introduce new customisation depth to the widely praised Harvest Moon franchise you’ll otherwise experience a similar but highly polished adventure to the previous titles. With these new upgrades its the same Harvest Moon as always but with enough new content that long term fans will enjoy their farming adventure. 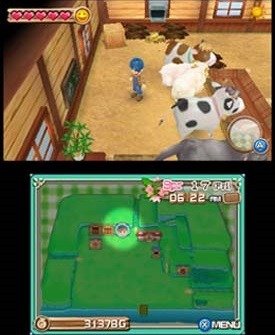 This time around players will be in charge of rebuilding the abandoned town of EchoVillage which is a blank canvas for gamers to paint with their own brush. With plenty of freedom on how the town takes shape you can create something based on your own tastes and preferences. This is true more so than ever in the Harvest Moon franchise with one of the first of the series to feature the depth of house, furniture and village appearance options that became a staple in future releases as console hardware has improved over time.

For those unfamiliar with the core Harvest Moon series the gameplay revolves around players customising their avatar and looking after a run down farm while also enhancing the nearby village. The farm is your main base of operations though and requires players to choose which crops to plant and livestock to raise which ultimately can be sold for profit and spend on all sorts of impressive in game items. 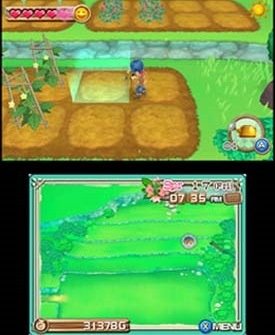 Beyond the farm aspects players will also have to spend their time finding collectible items which serves as a recurring theme in the series and provides that side objective to the core village restoration objective. Along the way to this goal this means plenty of talking to the townfolk and eventually pursuing deeper relationships with them while rebuilding the town of EchoVillage.

What really separates Harvest Moon 3D: A New Beginning from the many other titles though is that the town will have in built customisation beyond just your farm and character. While not done in the past likely due to hardware limitations more than anything this small step on the Nintendo 3DS significantly opens up an entire new Harvest Moon experience not previously seen in the franchise. Because of this expansion the number of items in Harvest Moon 3D: A New Beginning has also been drastically increased so there is no shortage of new items included as well. 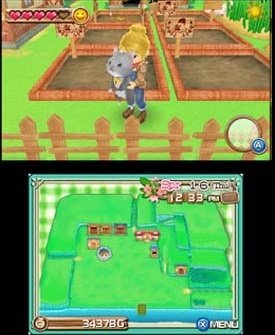 Newcomers and long time fans alike will enjoy the new beginning to the series that this Harvest Moon franchise addition provides. The ability to control the wider game world expands the gameplay to a never before seen level and translates to countless hours of gameplay for you.