Hearthstone (originally Hearthstone: Heroes of Warcraft) is a free digital card game from Blizzard Entertainment which focuses on a simplification of the genre while retaining enough depth (in the right areas) to allow for a competitive scene to exist and thrive. Released originally in 2014 Hearthstone has continually been expanded with new expansion packs to broaden the range of cards and overall strategies that players can leverage while also maintaining an audience of players well into the millions.

Drawing inspiration from the Warcraft universe Hearthstone has a nostalgic feel for fans of the fantasy franchise although those unfamiliar are not entirely left out in the cold with a large amount of the lore available to digest through Hearthstone alone should players seek more context to the cards they play with each turn. These turns take place in a traditional card game format with players devising a deck of 30 cards and pairing it with a unique hero power with 9 free available heroes to start, a number that nearly quadruples through purchases and other unlock methods to provide a wealth of heroes to command. 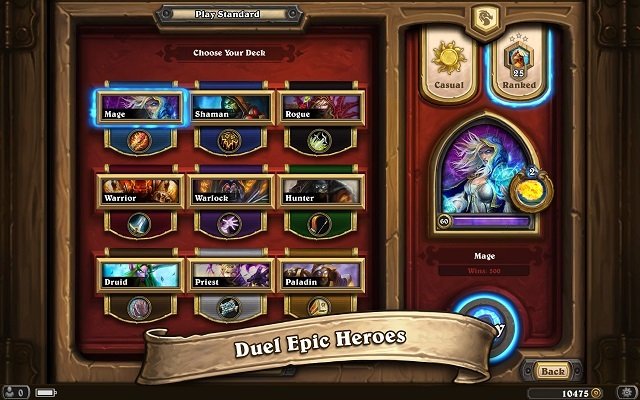 The primary driver of strategy though is the nine underlying core classes which tie into the free heroes offering druid, hunter, mage, paladin, priest, rogue, shaman, warlock, warrior and death knight. Each class comes with their own dynamic hero power that can change from start of the game to the end and allows actions such as dealing direct damage to an enemy, summoning units, healing your life bar or interactions with your deck.

Your choice of class also influences your broader strategy, deck and the cards that you’ll opt to use. For example the druids are often see as a durable fighting class capable of quick adaption between strategies when it is appropriate to do so while the mage is capable of being extremely offensive with devastating fire spells although can also control the game tempo by placing some ice based cards into their deck. 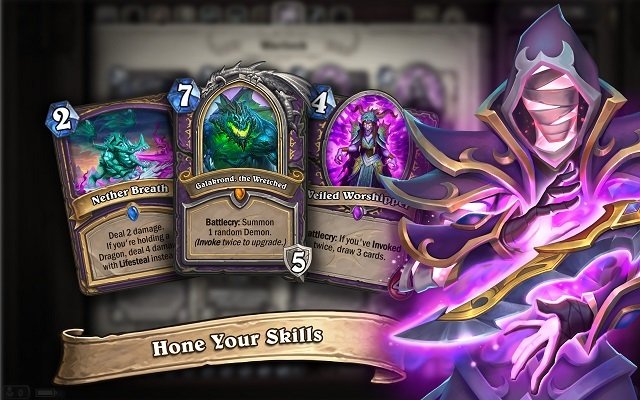 Building this deck like most collectible card games is an adventure in itself in Hearthstone with players beginning with a basic collection of cards which can be slowly built up over time through gameplay (primarily daily quests or winning matches). Given the digital design Hearthstone also includes the ability for players to breakdown unwanted cards and recycle the materials into new cards for their collection. Unfortunately with the freemium model design Hearthstone does contain elements of free player grind or pay to unlock cards although that is not a unique trapping of the genre.

With your deck complete the core gameplay of Hearthstone is a 1v1 affair against either human or AI controlled opponents with the ultimate objective to bring your enemy health down to zero from a starting point of 30. Hearthstone opts for an entirely segregated turn system in this regard which means players are limited to playing cards during their turn only and can’t react directly to enemy actions as is possible in other physical card games. 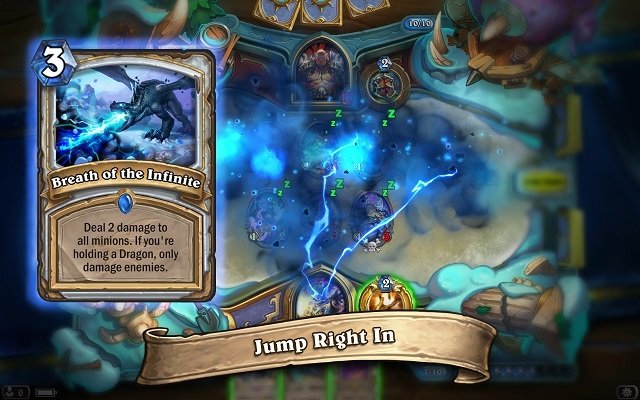 Simplification is also present in the summoning currency of Hearthstone with a mana system that requires players to budget their available mana when summoning cards that cost between 1 or 10 mana and can range from minions to spells, heroes or weapons that have various interactions with each other to create strategic combinations. With a certain amount of mana provided each turn players can opt to summon a large number of low mana cost units quickly or instead save up carefully for more powerful cards as part of a turtling strategy. Other game modes change some mechanics slightly such as challenging players with specific decks or limited card selection and offer a change of pace albeit the core turn based card strategy remains the same.

With thousands of fantastically designed digital cards to collect, a huge following and the support of Blizzard behind Hearthstone it’s sure to maintain its hold as the new leader in this space for years to come and worth exploring if you fall into the category of collectible card fan, strategy fan, casual player or hardcore player.

Games Finder is a Steam Curator and featured in the aggregate review scores data of MobyGames and Neoseeker.
FEATURED ON
Games Like Clash Royale, Games Like Deck Heroes, Games Like Magic The Gathering, Games Like Yugioh
1 COMMENTS
LEAVE A REPLY Cancel Reply