Top down shooting and high quality sci-fi setting is what Helldivers delivers on Windows and PlayStation consoles. Take to the galaxy alone or (preferably) in a team of 4 players in co-operative missions to seize enemy controlled planets. 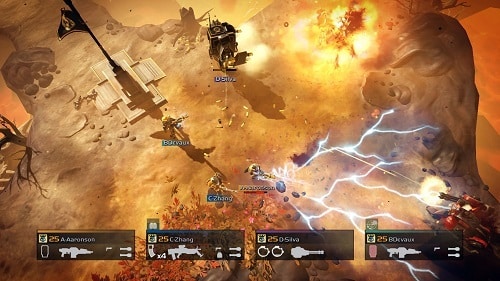 This galaxy is highly dystopian where managed democracy rules the human race, referred to as Super Earth. Now besieged on all sides by the Cyborgs, Bugs and Illuminates the government commands soldiers forward to claim territory and subdue them with whatever means necessary while retrieving technology to preserve the current way of life.

What this means for gameplay is players facing off against one of the above mentioned enemy types by flying from planet to planet. Each level is procedurally generated, requiring players to complete a single objective or multiple within each planet landing. In particular Helldivers encourages players to devise their own strategy for each level with options on where to land and loadouts providing plenty of depth.

These loadouts are centred mainly around weapons and stratagems, both of which bring plenty of depth. In the weapons department you can select a primary weapon along with a sidearm from the usual range of classes (explosive, assault rifle, shotguns, laser, machine guns, etc.), each has their own varying range, magazine, power and fire rate along with special elements to consider. 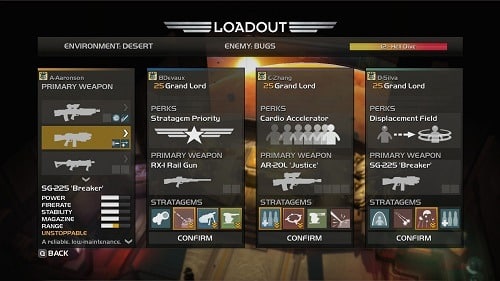 Stratagems on the other hand are the equipment and abilities that you call down from your ship. These range from resupplies and turrets to powerful airstrikes that can turn the tide of battle and upgraded beyond their first rank. Stratagems are activated via a sequence of arrow codes and have activation times which adds a tactical element to their usage.

Other mechanics to consider in Helldiver include always on friendly fire, helping team mates up and the ability for random players to drop in and aid players at any moment if games aren’t set as private.

Games Finder is a Steam Curator and featured in the aggregate review scores data of MobyGames and Neoseeker.
FEATURED ON
Games Like Castle Crashers, Games Like Destiny, Games Like Warframe
LEAVE A REPLY Cancel Reply