Claiming the title of one of the most popular in the mobile RPG genre is Heroes Charge. With over 10 million installs on Android alone the community for the game is one of the largest around and just waiting to be conquered by another player.

Featuring a healthy dose of fantasy with the likes of pirates, faeries, mages and powerful warriors your role in Heroes Charge is to build up a team of your favourite heroes to tackle a series of stages. You won’t find much new under the hood but the refinement in Heroes Charge has been a key to its rise through the respective app stores.

Battles in each stage take place on a 2D plane with your forces lining up on the left side of the screen and advancing against enemy waves that come from the right. In order to survive this assault you’ll need ample hero power and variety to ensure you are well equipped to deal with the enemy types.

Successful stage completion takes you one small step closer to your ultimate team with the likes of new equipment, experience and game currency. By pumping your favourite characters with the forementioned they’ll go from simple fighters to ultimate and reliable warriors in your roster. 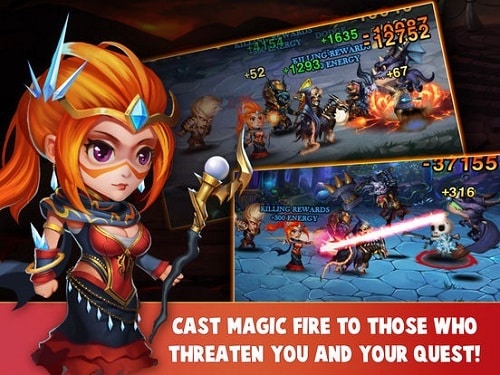 In line with similar titles your control is limited to activating your heroes special skills and building your team as they’ll move across the battle automatically. This doesn’t take the challenge away from PvP and the other game modes though that require a fine tuned team.

If you’ve tried comparable games but grown tired of them due to the smaller community sizes and available strategy information then you’ll enjoy what Heroes Charge has to offer.

Games Finder is a Steam Curator and featured in the aggregate review scores data of MobyGames and Neoseeker.
FEATURED ON
Games Like Idle Heroes, Games Like Summoners War
LEAVE A REPLY Cancel Reply