In Heroes of Camelot players must reclaim Camelot from the evil Black Knight using their own customised deck of card characters. Set in a fantasy world you’ll use medieval warriors to face all sorts of mythological beast and undead opponents. 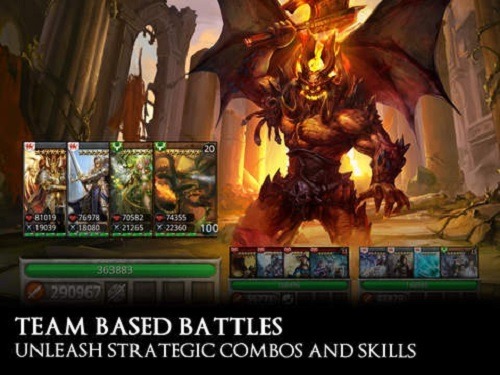 Heroes of Camelot is a stage based experience that takes players through 10 different cities for a total of nearly 100 stages to beat. Outside of this core campaign players can also fight in PvP battles, join guild wars or tackle the unique team based assaults to earn yourself the rarest cards in the land of Camelot.

Going through a fairly basic tutorial players will be able to quickly grasp the basics which are similar to most other card battle role playing games out on the market. From here you’ll begin the story part of the campaign that gives some context to each battle although it’s no masterpiece in terms of story writing.

Using a standard progression formula players will gain new experience, gold and cards for every quest they overcome. If you can’t get the cards that you desire through levels and purchases then you do have the option to combine or upgrade your cards instead.

This card upgrading is particular important if players are to beat the area bosses which put up a much greater fight and generally require a bit of back tracking to get a few more powerful cards while refining your strategy. 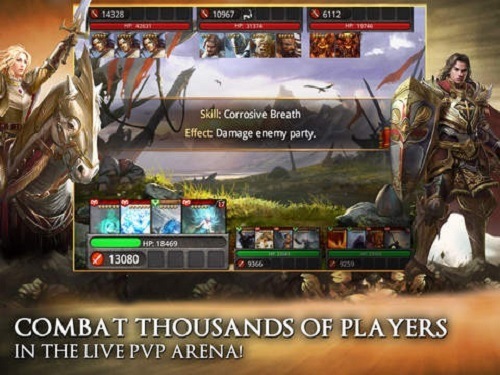 Coming up with a basic strategy in Heroes of Camelot isn’t too difficult but as you advance and unlock the ability to have three squads in battle at once and make use of each cards unique abilities and stats you’ll find a good amount of depth for what is essentially a very simple card battle game.

Heroes of Camelot is a decent offering in the mobile card combat space, to unlock the real longevity of the game you have to look beyond the single player elements and get your feet wet in the multiplayer features (guilds, chat and PvP).

This review was first published on September 17, 2014. Read our update policy to learn more.