Jump from galaxy to galaxy in the insanely titled Holy Potatoes! We’re in Space?! A game about exploring a procedurally generated universe on your mission to save grandfather Jiji from the hands of The Eclipse.

While comparisons to Faster Than Light are inevitable Holy Potatoes! We’re in Space?! takes a much different approach, doing away with the rougelike elements for a more structured (and hilarious) adventure that comes with different combat mechanics, a crafting system, crew skills and so much more. 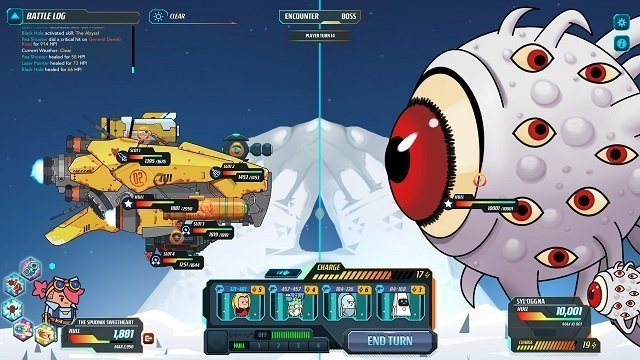 The result is an insane and strategic adventure that will see you adjusting your strategy based on the equipment you find, the encounters that take place and your reserves of $tarch and other materials. The whole thing is wrapped up beautifully in a pleasing art style that ensures you’ve got some visual eye candy but still able to quickly assess the situation at hand.

Your adventure is split into separate universes that each have their own main objective to hunt down something from the planets in that region to activate a boss battle and escape onto the next universe before The Eclipse can catch up to you. These are pulled right out of pop culture with such galaxies requiring players to hunt down a cat (clear inspirations from Nyan Cat) and to help a familiar face find an ancient idol within some alien ruins. The references definitely don’t stop there though with conversations, items and crew members all having some sort of link to a fictional character, famous person or internet meme.

Given the large amount of these references some are sure to fly over your head but are generally done in such a way that you don’t need to understand the reference to follow along and thus the writing holds up quite well from start to finish. 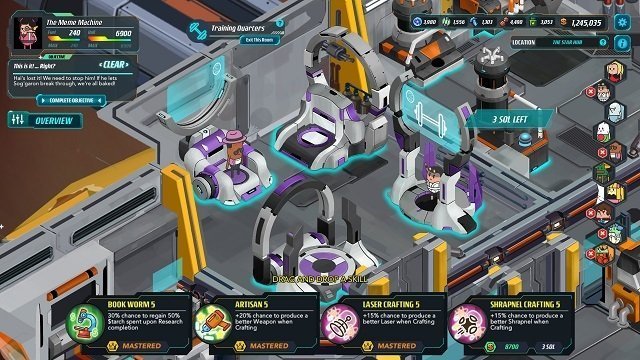 Actual gameplay in Holy Potatoes! We’re in Space?! has players jumping between planets on their custom named ship and then exploring the surface which contains random events. Events can include ship encounters, random crates, special deals or people asking for help. Similar to FTL all of these have a risk/reward consideration as while you might be rewarded for your trouble you can just as easily cause some fatal haul damage.

The majority of random encounters though are ship battles which are turn based stand offs. Each turn you’ll generate a certain amount of energy (based on ship upgrades) that can be used to fire any of your weapons (up to 4) against either an enemy weapon or directly against their haul. Weapons have various attributes including damage, accuracy, critical chance and attributes to consider such as the rail gun that can pierce a shield or the missile splash damage.

Countering damage is managed through the shield system which can only protect a single weapon or your haul at a time so will need to be strategically placed. It’s important to note that Holy Potatoes! We’re in Space?! leans heavily on the management side of the equation and there isn’t much evolution in combat from the first battle to the last other than adding more gun slots and the unique boss battles. 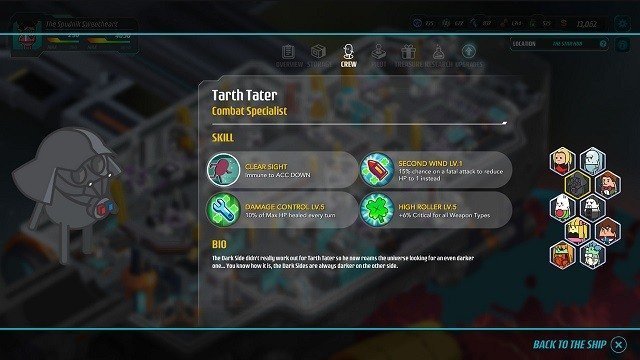 This is by no means a negative point, especially if you go into the game with the understanding that the bulk of strategy happens outside the firefights and is through managing your resources to craft new weapons and train crew members for a specific strategy. This is generally easy to do although can be a bit tedious at the start of your adventure when you aren’t as familiar with your options as you jump between the ship systems and decide on what you want to upgrade, taking into consideration your limited funds and time.

Between the hilarious game design and vast management mechanics Holy Potatoes! We’re in Space?! is an extremely hard title to put down as you constantly wonder what’s around the corner and how to optimise your resources for success.

This review was first published on February 19, 2017. Read our update policy to learn more.