Ikariam is a Greek inspired strategy MMO that players can play in their browser or mobile device as they conquer the land and seas of their similar themed Greek enemies (AI and other players). While other games in this game niche often take players into the future or back to the medieval ages Ikariam opts to take players back even further with a strong Greek setting that ensures a reasonable level of historical accuracy for building and troop designs. While Ikariam uses a rather simple 2D interface that dates back to its original 2008 release the game has continued to build upon its level of content allowing for ample control and variety as you seek to protect and grow your own Greek province territory. 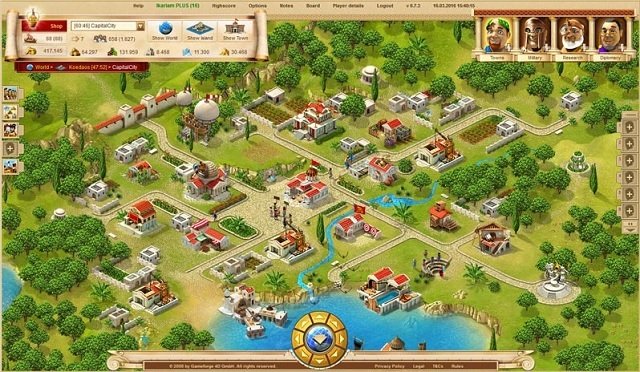 Just like other games in the genre you will focus on growing from a small island village with military force or trade to ultimately control more land in the game universe which allows you to participate in late game activities and rise the ranks of players. Ikariam has proven to be very popular with its large player base, simple interfaces and unique resource system that encourages trading more so than other titles that often have a preference for raiding bases over player co-operation and trade.

Once you create your account on Ikariam you’ll spawn on your own Greek inspired island that will also be inhabited by other players (up to a maximum of 16), because of the large player base in Ikariam there are literally thousands of these small islands which make up the game world and are designed to remind players of the various small Greek islands of the real world. While players can access other islands as they progress the starting 16 factor is both a benefit and curse as while it prevents players being overwhelmed by other players but can be a drag if it turns out your neighbours are inactive players. 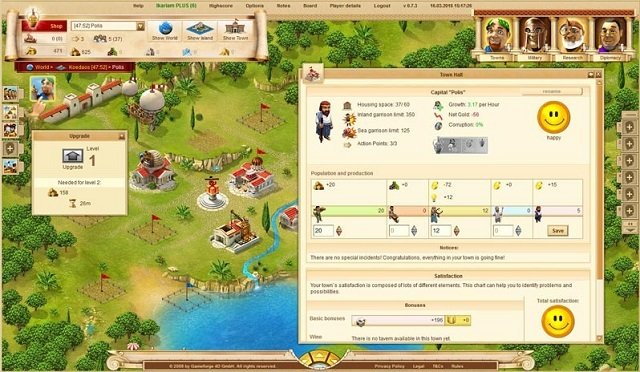 These islands do drive the unique resource system of Ikariam though since each island only has access to wood and one of the other resources (marble, crystal glass, wine or sulphur). Because this means that every player will only have access to two of the five total resources the game has a heavy focus on economic trading or alternatively raiding other islands for resources that are unique to that island. Not only does this feel realistic with certain regions of the real world often specialising in a single resource but it’s a great mechanic to encourage trade.

Making these gameplay decisions in Ikariam is performed through your four different advisors who offer advice on town planning, military, research and diplomatic relations along with the necessary interface to make these strategic decisions and drive your island settlement growth and ultimate survival. Ikariam takes gameplay one step further than most MMO strategy games by requiring players to carefully manage the happiness of their townsfolk to ensure your city is running as efficiently as possible and to prevent them from leaving. This mechanic helps prevent players from mindlessly erecting buildings without first considering the society and in turn efficiency impact to their civilisation. 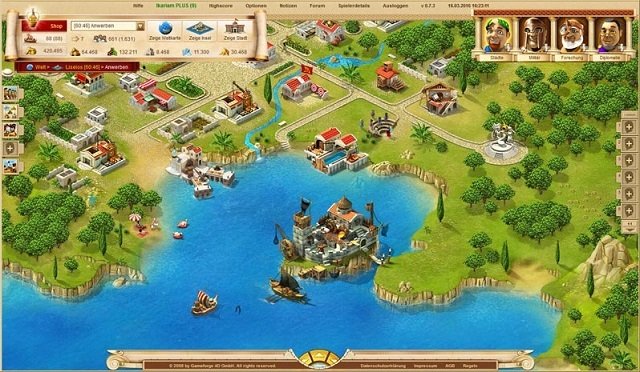 With the large feature list on offer in Ikariam it is easy to get lost in exploration and investigation of the inner workings of the game mechanics as you seek maximum optimisation of your island and how best to acquire the resources that aren’t present on your starting island. This strategy also extends to the military side of Ikariam with your careful troop management being vital rather than excessive emphasis on a premium currency system to get ahead of others.

Games Finder is a Steam Curator and featured in the aggregate review scores data of MobyGames and Neoseeker.
FEATURED ON
Games Like Evony, Games Like Game of War, Games Like Grepolis, Games Like Travian
LEAVE A REPLY Cancel Reply