Infect Them All 2 : Zombies is a campaign orientated game that sees you attempting to infect all the humans on each map. Available on iOS only the base game is available for free with a paid version with additional zombie champions for you to control. 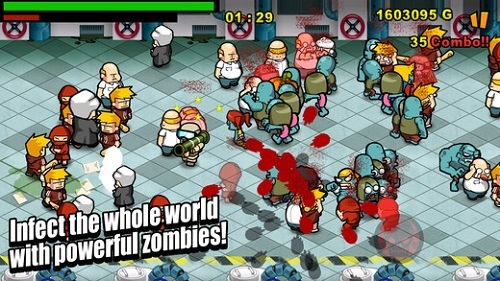 Building heavily on the original and borrowing much from the game assets Infect Them All 2: Zombies is more about refinement of gameplay than re-invention which might turn some fans of the original off since it looks and plays like essentially the same game.

For gameplay players will advance through a 100 level campaign with one of 8 unique zombie units. Each level takes place on a small game map with dozens of varied human units walking around. Your objective in traditional zombie fashion is to convert all these delicious humans into health by eating them or bite them instead to convert them into minions to help you beat the level instead.

Players only have control of their hero zombie though and with an ever depleting health bar it is a race against time to convert every human and advance through the campaign. While some humans will be converted easily as you advance you’ll encounter tougher humans that need to be weakened first or will even fight back. 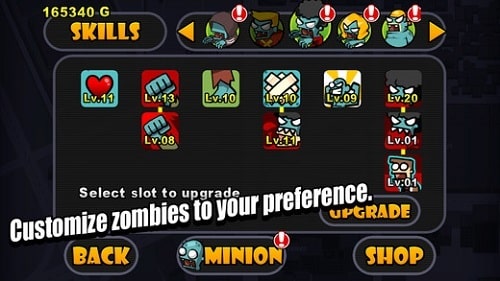 To ensure you feel that sense of progression and help you combat the ever increasing strength of your enemies you’ll be able to spend gold that you earn for each level on zombie and zombie minion upgrades. These options include things like health, damage, speed, defence, number of starting minions, special attack damage and stamina.

While the concept of the game is on the simple side the sense of progression in Infect Them All 2 : Zombies and the extra mission types you’ll find along the way make it an addicting infect mobile game.

Infect Them All 2 : Zombies