Infectonator is a game that sees you taking control of zombie hordes with the objective of taking over the world one location at a time. Available for free on iOS and Android with a freemium model for additional content. 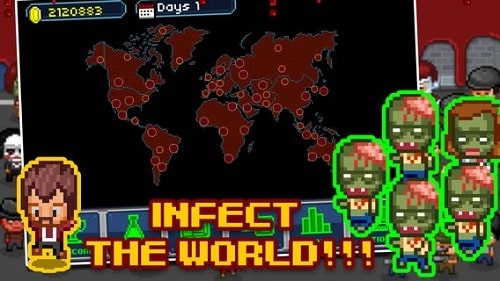 After infecting your way through the tutorial basics players are greeted with the world map, which is just waiting to be taken over by the zombies under your command. Each country is further split by town which each come with their own population and challenges to overcome for full infection. Each town serves as its own little battleground with people walking around the streets your victims for each level.

Achieving this infection requires careful planning on the players behalf to use all their available tools effectively. Your primary infection tool is your direct infection which infects a small area around your mouse cursor and serves as a great way to start the chaos in each level. Any humans caught in this area have a chance to turn into zombies which will then in turn hunt out other humans in the area to infect them.

Players are severely limited at the start of their Infectonator journey though as your weak little zombies have only a small amount of life in them and will quickly die out before they can cause too much damage. To help counter this players can alternatively rely on direct zombie spawns (with their own abilities) or support skills such as grenades to quicly kill several humans. 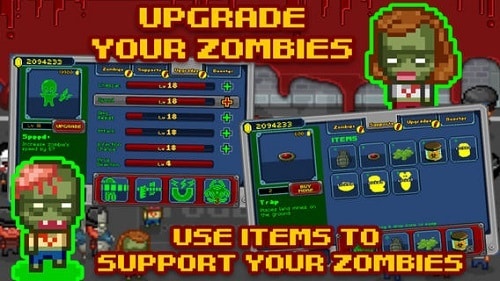 To conquer the more difficult levels players will need to rely heavily on their lab upgrades which allow you to unlock more deadly zombie variations, purchase one time use support items and improve the stats of your zombies with options such as lifespan, speed, damage resistance and attack. All of this is funded through the game currency of gold which is earned for attacks on towns, completion level objectives and unlocking achievements.

Don’t expect the human population to lay down and wait for infection though, with further levels players can expect special agents, police and the military to actively fight off zombies on the streets, making total infection much harder.