Inside Out Thought Bubbles takes the idea of memory bubbles from the hit movie Inside Out and brings it your mobile device (iOS and Android). Shoot and match memories across the 1,000+ levels with power ups from your favourite characters from the film world. Fan of the storyline and characters or not Inside Out Thought Bubbles is a welcoming addition to the growing Disney themed mobile games. 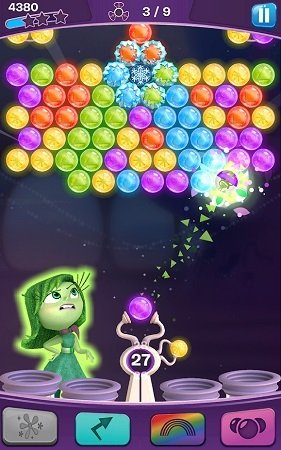 The game opens up with Joy greeting the players and introducing them to headquarters, placing a new happy memory alongside the vast shelves of other ones. Joy is just one of the characters you’ll get to follow along with as Fear, Sadness, Anger and Disgust also make an appearance across the film inspired locations of Family Island, Boy Band Island, Imagination Land and many others. If you’ve seen the film then Inside Out Thought Bubbles has an extra level of appeal as you move between these familiar spots.

Mechanically Inside Out Thought Bubbles is your standard bubble shooter, you’ve got several colours of bubbles (called memory balls), an aim assist to help you hit those tricky shots and over one thousand levels. The objective for each level changes up regularly from clearing the entire board of memories to capturing memory orbs or saving mind workers. While simple its made more complex by limited numbers of coloured memory orbs and obstacles such as faded memories that require you to carefully consider your next moves. 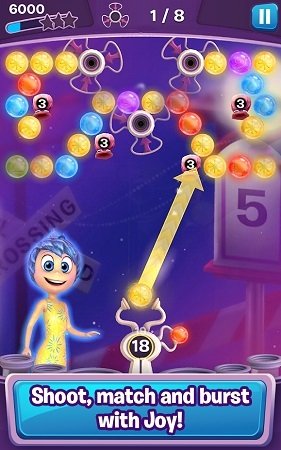 Regardless of your individual level objective it regularly revolves around two key mechanics, using your available pools of memories and making best use of the power up of your selected Inside Out film character. While some levels have a set character most do let you pick who you want to play as which changes your power up for that level and opens up different strategies in the process.

Sadness for example can create a line of clouds to wipe out orbs while Joy can perform large matches by converting a colour to a different one. Anger, Fear and Disgust have similar abilities to clear the board quickly that also tie into their emotion such as the fire path generated by Anger, the ability to send balls flying as Fear and a repel function with Disgust. 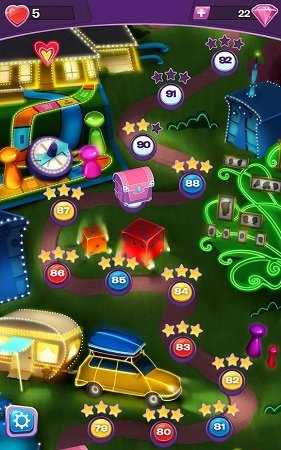 With fantastic visual and mechanic tie in to the popular Disney Inside Out this title is a great iOS and Android experience although a few rushed corners stop it from being an award winner.

Inside Out Thought Bubbles