Into The Dead is a simplified endless runner that has you dodging the deadly grip of zombies through predominately open fields. Opting to step away from the usually colourful and vibrant endless running titles on the market Into The Dead offers something more intense that can get your heart racing. 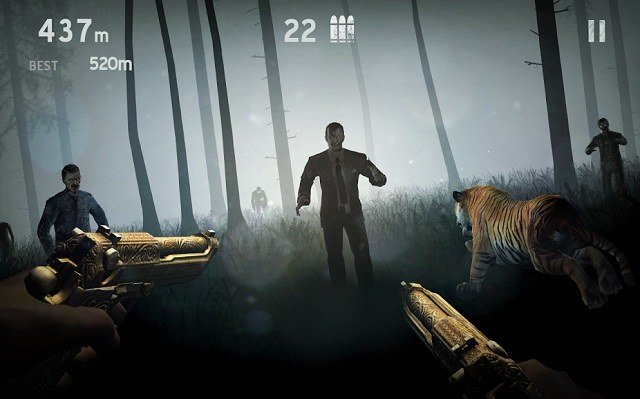 With a world now full of the undead your challenge is to last as many metres as possible while comparing your achievements to your friends or your own past attempts at survival. Like others in the genre each attempt at outrunning the zombie pack can last anywhere from a few seconds to several minutes depending on your reflexes and luck in a particular run and will steadily increase alongside your game knowledge that grows overtime.

In order to achieve this survival Into The Dead provides a simple control framework that allows you to move from side to side in order to avoid the dark shadowy zombie figures in front of your character who often appear only as mere shadows on the horizon before revealing their horror in close person. Despite the simplistic fundamental principle Into The Dead offers a total of four different control schemes which include tilt, touch and two thumbstick modes to cater to all preferences. While this is a simple addition it is nice to see this level of customisation in a simple mobile game particularly when something like control scheme can quickly make or break these types of experiences. 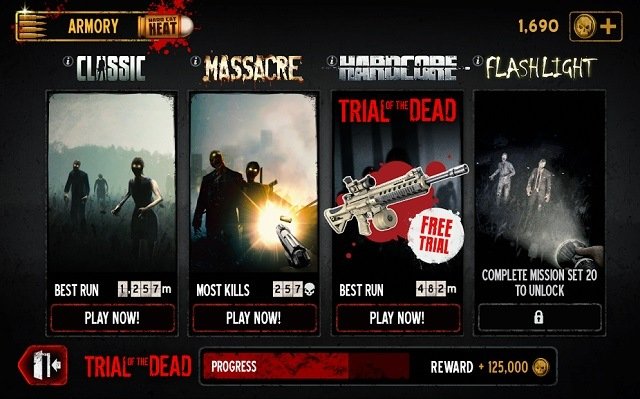 Into The Dead also features four different game modes which are slowly unlocked as you play the game and complete missions (such as reaching a certain distance, killing a certain number of zombies or activating a perk). You’ll start with the classic mode where your only objective is to run for as long as possible by eventually unlock massacre where your goal is to kill as many zombies as possible, hardcore mode which offers more of a challenge and finally flashlight mode where you’ll have to rely on your flashlight to illuminate the path ahead while losing combat abilities entirely. Swapping between the game modes regularly ensures Into The Dead is a diversified experience although most players will find they have a stand out favourite game mode that absorbs most of their game time.

For each game that players complete they’ll earn coins based on their achievements and distance which are spent to improve your chances for survival in subsequent runs in typical endless runner style. These coins can either be used for perks at the start of each game such as starting with a weapon, getting a headstart, increasing your ammunition, having more crates appear or hiring a canine companion to periodically attack enemies in your path. Coins can also be unlock a variety of weapons and game skins for zombies to change their appearance alongside other cosmetic upgrades to customise your experience. 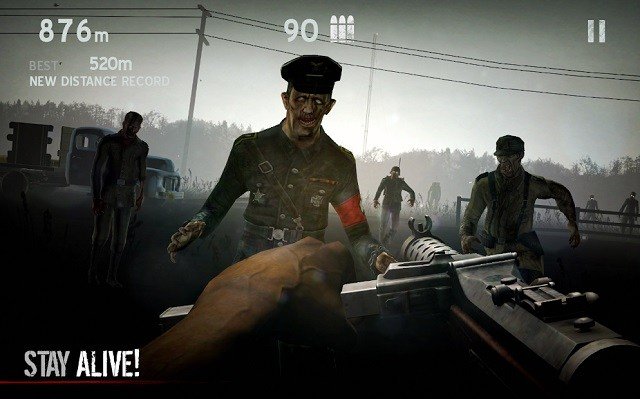 While weapons do give you some defence against the oncoming zombies their limited ammunition and general scarcity in the game world makes them hard to rely upon and simply a get out of jail free card if you stumble too close to an undead enemy rather than an available long term strategy.

The resulting experience of Into The Dead is a thrilling endless runner that delivers a great dark atmosphere into the endless running genre, it’s biggest let down though is the long gaps between unlocking items and the limited number of them available that may kill your sense of accomplishment just as much as the zombie horde.