The developers of Kingdom Rush have taken their impressive development of mobile strategy into the realms of science fiction with Iron Marines. Set deep into the galaxy you’ll experience real time strategy, up-gradable units, heroes to join your team and just a dab of humour. Taking place on three different planets there are a total of 21 core missions available in Iron Marines which will also slowly grow your fleet of available units. Each of these missions comes with a varied objective and is built around your core strategy gameplay of base creation, scouting and then making a final push into the enemies stronghold while also holding your own base down with appropriate defences. Paired with these core scenarios are an additional near two dozen special operations missions that focus more on controlling your hero character through a specific and more scripted scenario resulting in an overall campaign that feels very much inspired by the likes of StarCraft but still worthy of more than just comparison.

Both of these main missions and special operative levels work hand in hand together to build up a story and setting while also providing a touch of variety. Across both of these game elements players will rely on one of 11 possible heroes (3 free) and over 40 different upgrades that let you push your strategy in a chosen direction. It’s a shame that so many of the possible heroes are hidden behind in app purchases in a game that is already at the premium price range of mobile gaming. While players intended on replaying Iron Marines several times may seem some value the standard gamer will want to quickly pass over these.

For free heroes you’ll be able to use Taggins who is the starting hero and a veteran marine capable of boosting his damage for a short period through Uranium Ammo and gain a personal shield to stop all damage with upgrades for his base health and armour. The second free hero unlocked a few stages in is Kara who is adapt at fighting both air and ground opponents with her abilities based around barrages of rockets and missiles. Finally is Paragon a free hero melee specialist who uses his powerful sword, calls on undead fighters and heals himself with attacks. 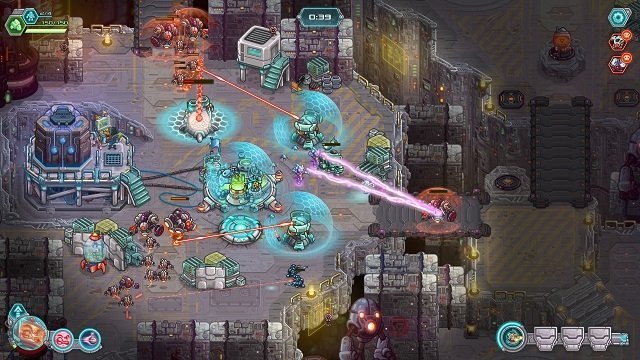 Just like these heroes can be swapped as necessary so can the 40 odd upgrades that you’ll slowly unlock over the course of the game missions. Perhaps you want extra resources on your missions, a powerful infantry unit, extra damage on certain units, faster unit respawn and many other strategy changing upgrades.

Thankfully, this choice is also not a permanent one with players free to reset their research in between missions. Heroes have similar customisation with 3 different abilities that you can place points into with each of them able to be fully maxed out at max hero level of 10. While the other 11 heroes are tied to in-app purchases they are by no means required to complete the campaign, consider them an additional donation to the developers instead and entirely optional.

Onto the actual missions themselves players will find a wide range of objectives from defeating enemies, protecting assets, rescuing units and everything in between. Core missions are set around claiming refineries on each map which generates resources to be spent on turret defence systems or individual units with carefully designed caps to ensure you can’t simply outgrow the mission requirements. 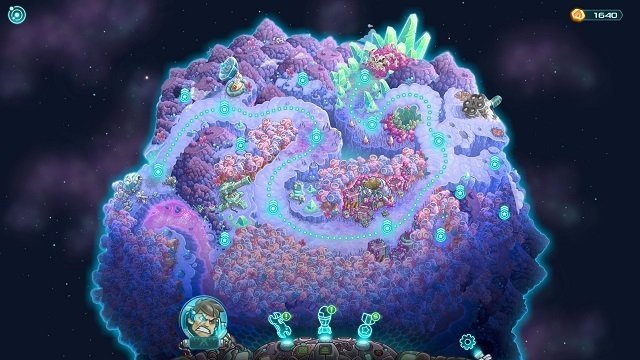 This also serves as one of the genius design elements of Iron Marines that makes if feasible to play on mobile devices with the small armies you’ll command of generally 3 to 4 squads. In order to counter the need for multiple units Iron Marines lets you swap your units at will whenever you desire. No longer need that group of Rangers? Swap it out for a Sniper unit instead or an Engineer team for their building destructive powers. This flexibility and smaller unit numbers is perfectly suited to the mobile gaming environment but still offers sufficient strategy.

Additionally squads also regenerate units when out of combat to keep you focused on exploring and killing rather than rebuilding a fighting force. All of these design choices are very reminiscent of Halo Wars, a real time strategy title that employed similar mechanics to make the genre playable on a console. With relatively simple touch controls also offered by Iron Marines it’s achieved a refined RTS experience on mobile where many have struggled before.

Games Finder is a Steam Curator and featured in the aggregate review scores data of MobyGames and Neoseeker.
FEATURED ON
Games Like Halo Wars, Games Like Kingdom Rush, Games Like StarCraft
LEAVE A REPLY Cancel Reply